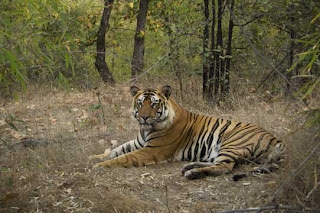 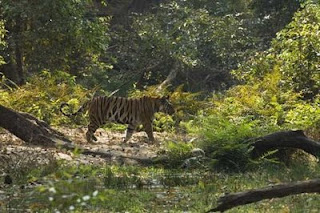 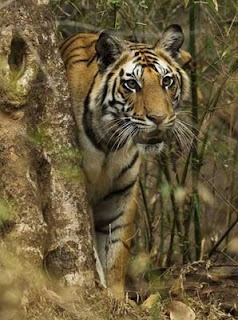 So i was talking about our Two guests. 4th afternoon was superb for photography. Although I was not having a clear view of the Tiger but I am satisfied that I made a saleable picture. Tiger sleeping on the road and none of the tourists from jeep on otherside are looking at him. How boring it is to watch a sleepy Tiger. Dappled light never makes a good picture.
It is very difficult to show the park in its best in this route system so we prefer to go late. Bandhavgarh means hills. Beautiful hills, good landscape and forest. many locals dont like me when I describe the forest. Conservation started in Bandhavgarh only after 1968. Average age of the forest is less than forty years old. All the old trees we see are those that were not good Timber at that time. Kay says we have better Bamboo then jungle. I first visited Bandhavgarh in 1980. Ashutosh Dubey Ranger and me came here from Kanha. When I asked for the road name to our Guide, reply was Birla Road. Most of the roads were made by Birla Paper Mill that were extracting Bamboo from this forest. This was going on till 1968. Mr J.J.Dutta Retired PCCF and CWLW of M.P. told me in person and in writing that before handingover of this area to M.P Govt he drove for 3 consecutive nights in Tala shikargah with Late H.H. Rewa and then Chief Minister Of M.P. Late Govind Narayan singh ji and did not see a single quadruped. He said that Maharaja was very unhappy with the condition of his Shikargah and probably this was the reason to donate the area to Govt. with a condition that Govt will declare it as a National Park. Dr Terence Walton, Equerry To H.H.Rewa confirmed this to Iain Green author of Tiger Jungle a story of Bandhavgarh and B2 ( Sundar).
The census paper of Bandhavgarh in 1968 does not mentions any record of Tigers. More Sambar and Barking Deer than Spotted Deer. Mr Dutta agreed with this figure with the fact that most of the land was under cultivation so there was not enough room for Spotted Deer to survive. Hill dwelling animals were somehow surviving. Most of the Tala range meadows are old agriculture fields. At some places farm bunds are still visible.
It was a nice sunny cool morning good for photography. We photographed some good Sambhar and birds. we reached Tiger show spot at about 0930. One could hear the growling noise of a male and female Tiger. Presumably they were mating. Tiger show was on another young male P10 who was sitting next to road on a rock. We went on Badhaini, small sturdy elephant, good for photography. I hesitate to photograph Tiger from Elephant back only because of angle. It gives an Aerial View of tiger. Jhannu said come come Aaj aapke layak he. I took wide angle and 300 both. I was cheating. I did not wanted people to see that I am carrying wide angle because I didn't want people to compete with me so I changed wide angle when we reached to the spot.
He was sitting on eye lable spot. You dont get much time on Elephant during Tiger Show. 2-3 minutes are enough. So one has to think about the frames even before seeing the object.
It was not enough so I asked the Ranger if we can go again. Yes, but only after everyone has seen. So we decided to look for Brown Fish Owl.we came to Jamunia Machan, 500 metre away fromTiger show where three tigers are present. Stork Biled Kigfisher were calling each other. Kay spotted them so one aftr the other about five jeeps were there to see King Fisher. We saw few spotted Deers running out of river with alarm calls. we look but nothing followed. Everyone left except us. We moved 100 mtrs further to look for Brown Fish Owl. There was another jeep watching them. One bird was in the nest and otherone was guarding the nest from a nearby tree. Within minutes we were alone again. I thought let us look for Photographable Adjutant Stork. We moved for 50 mtrs to owl nest and suddenly Kay whispered Tiger. Right to our jeep we saw a tiger entering the bamboo then she crouched. Her hind portion was clearly visible. Few minutes later she came out of the bamboo crossed the road infront of our jeep. we watched her for an hour, walking around river spraying ad rubbing her body to trees and on groud. She is on edge of her teritorry. She is marking her preence to claim the area. She wont succeeed. Lakshmi is too strong for her.
We went back to Tiger show and saw the sleepy Tiger. Mike dropped his flash light and his wife dropped her glasses from elephant back. Torch we got glasses belongs to Jungle now. Another point to mention in our Room Note. Careful with your Glasses, Cap, Lens cap. If dropped from elephant back little chance to get them back.
Afternoon beat the morning sighting. We thought to go to Rajbehra and spend the aftrnoon near pool watching birds, listenig alarm calls in peace. We heard an alarm call near Susiyari junction and there was a Tiger sitting in middle of the road. Cant beleive third tiger on road in two days. Oh another one sitting right to us behind the bamboo. Another alarm call fromleft and third one left to us. These are Durga's cubs. 17months old now. At this age cubs behaves like Teenager. Would like to explore the area but only when mother is not around. Whole afternoon was dedicated to them. Three good frames.
Fried Peanuts with Chai around campfire made the end of Daylight day.
Satyendra
Posted by Bandhavgarh at 7:47 PM

Thanks for sharing your safari experience. We also offer bandhavgarh safari. So,book your safari to observe wildlife.