This is only to record that a bait was given to Lakshmi on 3rd Feb according to Guides memorandum dtd 06/02/10 to Lakshmi but later on she was seen hunting Spotted Deer in river on 14th Feb. Means physically she is all right. Guides were on strike from 11th Feb and they won on 13th Feb.

According to their press release Field Director came to listen to their grieveances on 12 Feb night and at 11.45 PM he agreed to take necesaary action on their demands.

Posted by Bandhavgarh at 5:22 AM No comments:

Hariom gave us the news yesterday about Tiger pug marks in Gitanjali Hotel on High Street of Tala village. Quickly I was there in minutes to photograph the pug marks. After reaching there staff told me the story that how they saw her moving in the compound and all, hard to believe but they were telling everyone what has happened in the night. They told me that later this tigress killed Raju's cow. Raju lives behind the school building. This tigress came out of Gitanjali and walked towards his house through pugdundee near hospital. He keeps his cow in his Veranda. Tiger took it from there and killed it 15 ft away.
By the time I reached cow was taken away by the forest department to give it to its new owner.
This morning Ganesh gave us the news that another cow is being killed in Gitanjali. Again we were there and this time we saw all the pug marks and cow too. I think cow was killed very late in the morning because a very small portion from the rump was eaten. She didn't had much chance to eat it. We heard dogs barking at 0515-0530 from the same direction and I said to Kay that looks like Tiger was again in the village.
Which Tiger it can be!
If it is Lakshmi, tigress from Chorbehra then she has all the right to come and look for prey.
She has very poor territory. She has less than two km long 600 mtrs wide strip of forest that is fenced on one side and otherside is hill. She has two dominant females neighbouring her territory so she cant flex her muscles. Prey base is decreasing day by day in her territory due to several reasons. Her territory is being divided by fence which she crosses by leaping over on it and probably by that, hurt her one hind leg. She has little trouble in walking since last 18 months but otherwise perfect.
There is no possibility of any other tiger to visit the village because if it is so than this other Tiger should show his / her presence in the jungle.
What is going to happen!
Will she be sent to Zoo!
Why? She is not guilty of any thing.
She has the same right to find his prey as the villagers have to find the firewood in the jungle.
If ever this thought takes place in the minds of forest deptt officials easiest solution is to remove the chainlink fencing from the main road and give her freedom back for her survival.
Posted by Bandhavgarh at 6:00 PM 1 comment: 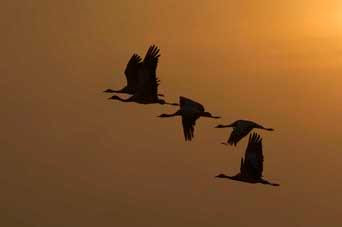 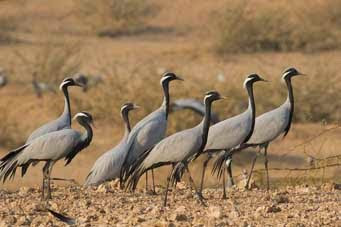 Kheechan is a village in Jodhpur district of Rajasthan where Demoiselle Crane comes in winter. I saw photographs of this place and since last few years it was on my wishlist . One morning Sunil and I drove to Kheechan. We had no ideas about their feeding place or anything but the moment you reach kheechan one can see the flocks flying in to one direction from all the side. We just followed them and reached to a place where more than a thousand birds were feeding in the compound. Someone from a nearby house asked us to come on his house roof for better view. What a view. I was completelty mesmerised.
Later on I saw thousands of birds landing on sand dunes and getting disturbed by people who uses these sand dunes as open toilet grounds.
Sevaram is trying to provide them a safer ground to live in Kheechan but without any monitoring help from from anyone. He is awarded for his work but as usual as it happens that awards are given to recognise the people and their work but not to support them in future .
He told me that he needs financial support to buy a vehicle to monitor these birds in the night. Presently he hires auto rickshaw to visit salt pan where these birds roost in the night.
Posted by Bandhavgarh at 7:39 AM No comments:

I am hooked to Horse Photography or in other words I am spreading my wings in Photography.
After Dundlod Endurance I decided to attend most of the cattle fairs in Rajasthan, only if my pocket allows me.
I checked Nagaur for hotels but found none on Internet so I took the help of Sunil Kapoor in Jodhpur. He asked someone else to book a hotel for me in Nagaur. I reached there on 23rd and immediately I visited the fair. Attendance of people and animals in Nagaur fair this year was poor due to the local body election taking place at the same time. I found Nagaur fair very interesting for various reasons. Rajasthan Tourism Hotel is not an alternate to stay there. They may improve but I did not found that place "perfect for a peaceful stay". Shree Aditya Hotel where I stayed is also on main highway but back side room are more peaceful than front one.
Posted by Bandhavgarh at 7:23 AM No comments:

Few years back Kay saw a cat sitting in our garden and she thought that this looks different than others so she checked it immediately with book and claimed that it is none other than Rusty Spotted Cat. I never saw this cat here in Bandhavgarh so I was not able to comment but she was very much sure about her sighting. This year someone photographed a cat in the park and put that photo on Internet labeling Rusty Spotted Cat. Yes it is and this sighting confirms that the cat Kay saw in our garden was also the Rusty Spotted Cat. So they are surviving here secretly. Yesterday I was in the jungle ans saw a dead cat near the road in the park. But due to the present scenario and the attitude of govt officials guide refused to check it properly. She was lying up-side down lower half portion of body was eaten but tail and upper half of the body was intact. I asked him to turn it over but he said time is gone no fun in checking these things anymore. Some naturalist from some other lodge was claiming it is a rabbit. (Good luck to the tourists with him)
So a new mammal for the Park. Rusty Spotted Cat.
Posted by Bandhavgarh at 7:06 AM No comments: