Life of a Butterfly 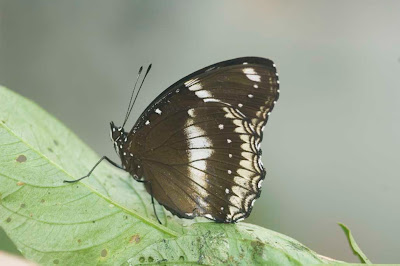 Beautiful butterfly may not have a beautiful life. We witnessed it this morning. Cockscomb we planted in June turnout to be wild Silver Spiked Cockscomb. We dont want these wild plants in the front garden so we decided to remove them. I removed few and suddenly Kay saw a butterfly roosting under the leaves. Kay picks the plant and I ran for the camera. Few photos and suddenly she opened the wing and flew off. We saw her flying away and laughed that we missed her photographing open wing. She hardly flew about 15ft away from us and a black object swipes on her and butterfly gone mising. That was our resident Black Drongo from the Garden. We wonder how many of the butterflies everyday gets eaten by the birds in our garden. Black Drongo, Small Green Bee Eater,Long Tailed Shrike, Red Vented Bulbul and Magpie Robin takes the adult butterflies and Common Iora, Tailor Bird, Tawny Bellied Babbler and Red Vented Bulbuls regularly look for caterpillars in the garden.Less than ten percent caterpillars reaches to pupa stage of their life.
Today first time in all these many years, since 1998, we saw a Cobra on our land. Kalicharan saw him near the garrage. He says he saw him with his hood wide open. We all saw him disappearing in the grass and cats chasing him.
Majority of snakes get killed by villagers, whether they are poisonous or non poisonous. For them snake is snake.
Posted by Bandhavgarh at 5:09 PM 1 comment:

I will write sometime about my this non-photographic trip to Kerala. I was highly disappointed with pesticides filled environment at Munnar. I am saying this only because in my one week tour of Kerala I couldnot photograph a single butterfly.
How are Tigers here in Bandhavgarh and in India is the same story. While driving from Umaria to Tala after seeing the road condition of last ten km towards Tala Kay said who would like to come here if they know the road condition? I thought there are many more things what people should know before going to any Tiger area for Tiger viewing.
As a villager living around Tiger Reserve I had to ask myself, Why we are not getting Roads repaired by the government? Why forest department object on road raipres around Tiger Reserve??
Do they think that people living around the Tiger Project areas are happy with this attitute of the Forest Department?
I know and I will say NO they are not happy and they dont want to live second grade citizen in their own country.
I know what happened in Karera. Villagers changed their crop pattern to get rid of the Bustard successfully.
I see similar things happening around Natonal Parks.
Forest Department itself is helping in destruction of Tigers in long run.
By putting Chainlink fencing most of the corridores are blocked. Many Tigers lost a major part of their teritorry and prey base.
By chainlink fencing tigers are confined to a very small area where in winter they prey more on fawn than adult animals. This affects prey base numbers badly.
In this cash crunch and high cost of living affecting villagers too. They see others minting money in the name of Tigers. One villager told me that no money can replace the milk i was suppose to get from my cow that got killed by a Tiger. I can understand his feelings. Monkeys looks very nice in the jungle, very good photographic subject, but in Mango season I dont want them in my Garden. Villagers have worst feeling than this about a Cattle Lifter.
So what chance we have to save the Tiger??
Govt or Forest Department putting more and more restrictions on Tourism. this means if we dont get a chance to see him how you expect us to be his wellwisher??
So tourist goes against the Tiger?
If villagers cant have free access to the jungle for their needs of Firewood, fodder and timber than they goes against the Tiger, openly or secretly??
If villagers start thinking that we are deprived of our rights only because of animals, govt treats us lower than animals, animals are on priority of government then I will say only a miracle can save the Tiger out of National Parks in this country.
I think in next few years time Tiger tourism will die. It will become a Glorified Safari Park safari in Kanha, Bandhavgarh, Ranthambhore and Panna.
A male Tiger is about to go from here to Panna to give company to those two lonely females.
Posted by Bandhavgarh at 7:12 PM No comments:

People are asking about cubs of P12. The information what i could gather is that they are safe and eating well in an anclosure made for Gaur. Live baby goat are supplied to them which they are killing happily.
I will post more news on this.
Today I am leaving for Kerala. Kay wants me to go while I am in mood to cancel my trip. Kay is not well she got cold and I am worried and hope this is not some sort of H1N1 flu. She has just came back from UK last week on 3rd sept.
Posted by Bandhavgarh at 6:44 AM No comments:

Best thing about this train journey to Delhi was that I was sitting with some very sober army people. First time I was travelling with Non Alcohalic army people. What a bliss.
I got struck in traffic jam on way to airport. Kays flight arrived 40 minutes before to its schedule arrival time. By the time I reached to the airport she was already out and waiting for me in parking area.
Very unproductive Day in Delhi. I saw an advertisement of hedge trimmer so we looked for that shop. Beleive me, never beleive what a Delhi shopkeeper claims on internet. He was sitting in a tiny dark storeroom trying to convince us to buy petrol version of hedge trimmer.
People are proud of this country which does not produce a small item like Electric Hedge cutter or Electric Lawn Mower.
We reached Bharatpur by 2030. Hospitality at Spoonbill are not comparable to any other hotel. When we go out we dont look for luxury accomodation. We prefer to stay at a place which is run by a local person and who employs locals. Spoonbill fits perfectly in our logic and budget theme.
Park is very very dry for birds. This is a first chance for us to see this park in such a state when not even a single nest of Openbill storks is seen.
We were happy looking for butterflies and got some nice photos.
Park shop is now even selling our Buttrfly Brochure.
Infact a brochure with less butterflies can do the job for bharatpur.
Rickshaw pullars in Bharatpur were literally begging for the business.
We came back home to see a good solid rain for two days. Soon I will be off to Kerala for a week to see Nilgiri Tahr at Munnar. So more later when i come back.
Posted by Bandhavgarh at 9:53 PM No comments: