Newly born died in the Family

Since morning Littlen was crying to come in. At last we let her come in with Tea. Kay was stroking her suddenly she realised that she is leaking. We put her on floor. She was crying to come back on bed. I brought a bed for her and she was put in this box. She will not leave Kay for a minute so she has to sit next to the box. Probably Littlen has no idea that what is happening in her body. She keep on making rounds and rounds in the room, leaking. After an hour or so she started delivering the kitten. First kitten was born dead and premature. She ate it instantly. She is not feeling more pain now. Second kitten was born after another thirty minutes or so. This kitten was healthy and birth was quick. She cleaned him but didn't knew what to do. Left him unattended. This happens with young experienced mothers.
Third kitten was born dead and other way around. She could not deliver him. Half of his body was hanging outside and she was running around in pain. Kay got worried and asked me to get some help. I asked Kali to call Nurse from Vet. Hospital. By the time Kali could go she delivered it.
Out of three new two born dead, one she ate and one got buried in the Garden.
This took away our morning working hours.
Now Littlen is comfortably sleeping in her box with her one kitten.
Posted by Bandhavgarh at 9:02 PM No comments: 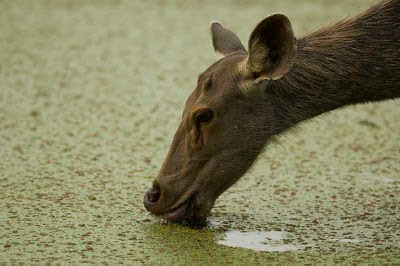 A day at home just to change the clothes in the bag and download the photos from Gir and again ready for Bharatpur.
Train journey was very quite except few mobile phones ringing in middle of the night. I wonder if ever country will have quite trains/coaches. Dinner packed by Kalicharan was very helpful in the train. Train reached Agra about an hour and a half late and this made us run to Agra Fort so we don't miss our connecting train to Bharatpur.
In Rome live like Romans so we cross the railway track at Agra Fort station to board the train. There was no other option except this. Cant go over the bridge in two minutes time was the thought in mind.
Travelling in A/C Chair car was a mistake. Suffocating and No fresh air in the compartment because A/C wont work in slow speed train.
We face the severe heat of Rajasthan, Temp was touching 47degrees. Spoonbill room walls were hot. Within few hours we decided to come down to comforts of ground floor room. We had a quick cup of Tea and within minutes we were ready for the Park.
Now park authorities are providing the bi-cycles. Good move with poor maintenance. Park was dry like bone. Dead turtles were telling the story of drought. We think that these Turtles could have been saved easily but after seeing the working of forest staff we could understand that how difficult it is for the management to get the needed work done. Lack of dedicated staff is the sad part of Wildlife Conservation in India.
Reason to visit Bhratpur this time was to attend the Marriage of Junie, daughter of Sh Arun Deo Sengar. It was a grand marriage. Everything up to the mark.
We met quite a few people there but meeting with Mr Girish Mehrotra was special. We need to see him some time in Allahabad.
we could not find any taxi to go back to Agra from Bharatpur. This was quite interesting. Someone offered his private car but his charges were much more than a proper Taxi. At last we decided to go by bus. Hot but faster journey to Agra. Bus took only 75 minutes to Namner. 5 minutes walk to brother-in-law's house. Quick cup of tea with lots of helpings of sweets from marriage filled the belly.
Train was again more than 90 minutes late. Kay missed her sizzler at Rieo. Journey back home was noisy. Too many crying kids with useless parents.
Reached home mid day and ask Kalicharan for a big Cup of Chai.
Posted by Bandhavgarh at 9:58 PM No comments: 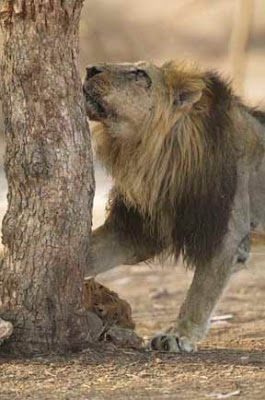 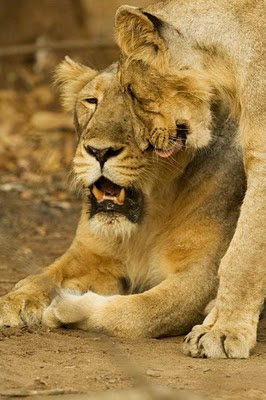 I did not found Sasan as a very popular tourist destination for foreigners. Food is the one problem. All the restaurant I tried were serving very oily-spicy hot food with very limited choice. I survived on Biscuits, fruits, Curd and Roti. All the Tourists do not go to stay at top end lodges.
Posted by Bandhavgarh at 3:17 AM 3 comments: