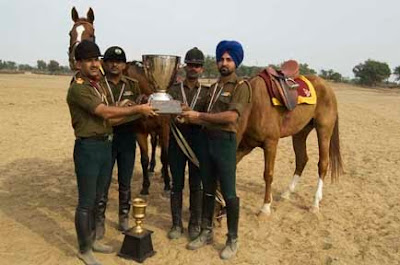 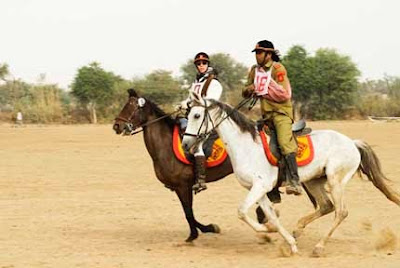 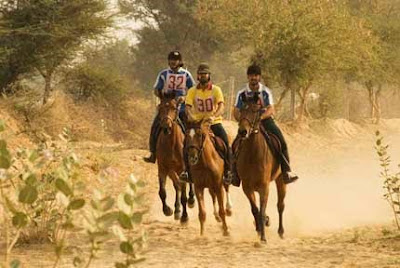 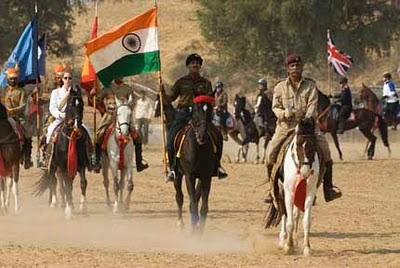 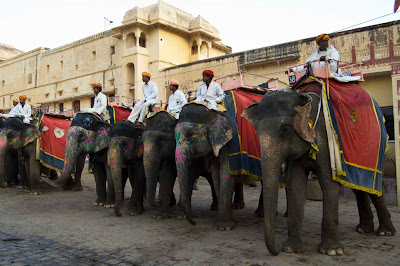 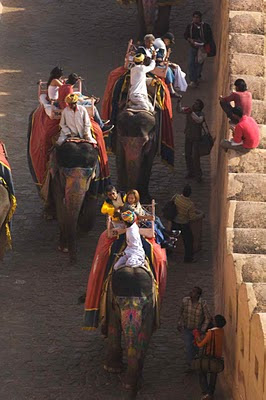 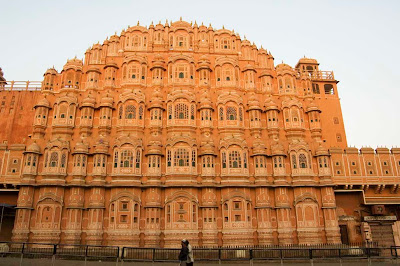 I could not photograph any of the monuments on my last visit to the pink city. Can you believe I missed the Amber fort and Wind Palace before so this time I had to cover these all. Intercity express from Agra reached Jaipur about an hour late. It was almost midnight when we check-in in the hotel. In the city like Agra Jaipur Delhi and Varanasi one must be aware of checking few facts with the hotel such as their check out time and breakfast time etc. We barely finished our breakfast at ten and the moment we enter the room the phone rang informing us that their check out time is 11 AM and we must leave the room by 11 AM sharp. This was a surprise.
We did it.
We moved to a guest house called Ashirvad. Neat and clean room but food costlier than any medium budget restaurant. Best time to photograph Wind Palace is early morning in winter when hardly anybody is moving on the road. I got my picture at 0645 AM. Amber Fort gets busy in the morning. when we reached there the elephants were still arriving from stable. Tourists were waiting for their turn to board the elephant for fort ride. We decided to walk. It hardly takes 15 minutes to reach fort. Some good photography on way.
Photos will speak better than my writing about Amber Fort so look for them at www.flickr.com/photos/satyendraphotography
Hawkers are the most annoying elements for tourists at Amber Fort. How can any tourist would like to buy anything while sitting on elephant! He wants to enjoy the ride and see fort from different angle but these hawkers never let them enjoy.
And there is no-one to control them.

Posted by Bandhavgarh at 10:14 PM No comments: 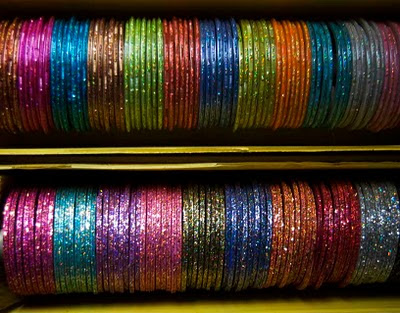 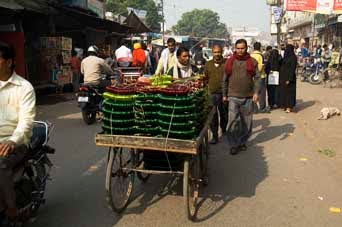 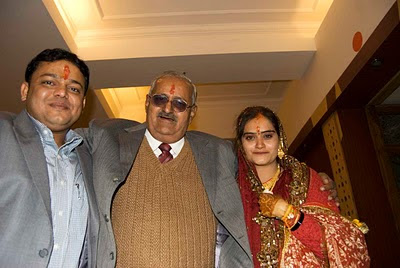 We were away for almost 16 days visiting Agra, Firozabad, Jaipur and Dundlod. Main reason to visit Agra was our neice Gunjan's Marriage. First we thought to stay in Agra for few days and photograph those unseen neglected buildings in Agra but plan changed and we decided to visit Jaipur instead.
After a long time we met some of our relatives in Gunjan's marriage. Ofcourse seeing Ravi after more than two years was fun and so the Agam, to whom we missed when he came here on Holi.
Next day after marriage we decided to visit Firozabad, a glass city near Agra. Kay wanted to see that place again. Firozabad is a crowded town. By the time we reached there every working person in the town was on his duty. Vegetable and fruit vendors were every where on road side and people ferrying bangles on handcart and bicycle choked the road. It is a town to be seen and experienced. For us it may be nothing but the person who knows Glass and Glass world compares it with Venice. Although only bangles are manufactured there but still the quantity and skill with premitive techniques makes it an excellent town in Glass World. My wife Kay use to teach Glass in an university in UK and was rated amongst the top glass artists in the world in her field. She was narrating me each and every technique of glass making that we saw there. Although because of a White skin person with me and secondly a camera in my hand did put lots of doubt in peoples mind so they never allowed us to see the kiln or real glass bangle making in the factory. Sometime I have to try this through an official channel.
I doubt people who buy the bangles or who use them with great pride only because of kind of money they paid to buy them ever think about the hardship being put behind making these bangles so special. I was told that 15 to 20 % bangles never reaches to packaging staff. That is the wastage in this industry at initial stage. It is very costly to use the polished bangles again to use as a glass.
When I was walking in those narrow crowded lanes of Firozabad my phone rang and I was bombarded with the demands of Kangan and bangles. I was getting the instructions about Size and colour and design o bangles and kangan and at the last even how many packets are to bought for each person was told. So last hour we spent in Firozabad looking for Bangles and Kangan for my younger sisters. We carried them for next two weeks with us and still lying here. Hopefully I made a good buy there.
Delebrately we did not buy anything for childrens only them to learn that they dont get gifts every time.
Posted by Bandhavgarh at 12:14 PM 1 comment: