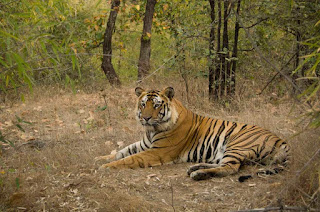 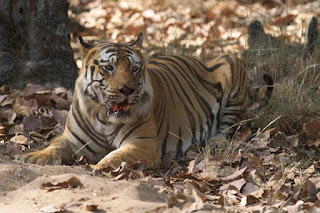 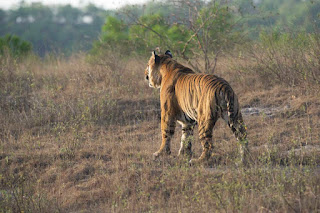 Pugmark Impression Pad or PIP is one of the most useless practice adopted by forest department. They just don't gain anything from it.  This is a practice from older days when staff use to try to recognise the pugmark of an individual Tiger. Now it is just counted the pugmark of a tiger male or female. No one has any clue that if there is a male pugmark here then which male?
By this method number of tigers remain the same while tigers goes missing.
Today afternoon I was with a guide who saw a Tigress opposite siddhbaba in Tala zone last year. he and driver wasim saw the female while tourists saw cubs running on hills.
This tiger was never seen with cubs again while her cubs pugmarks were seen in Chakradhara last year.
So where these cubs gone?
In a similar case last year Tulsi lost her one of the cub which was never seen again, Wakeeta lost her one cub and one is with her now but the third cub is missing and no one knows his/her whereabouts.
Her cubs from last litter is not seen in park area so they are also treated as missing.
Mukunda male who came to Bhadrashila area from Mukunda is missing since last season. Two cubs of Hemi from previous litter are missing.
There are so many people walking in the park in the name of Patrolling but none could find the dead body of these missing tigers.
All these people on foot and on bicycle are more of a disturbance to tigers than anything else.These people needs to patrol the periphery of the park from outside.
This constant presence of human being in there area must have affected their predation habit. Now we very rarely see any Tiger walking on road.
Some of the young cubs are still not habituated with the presence of these foot patrolling staff so they runs away for safety.
These foot patrolling staff needs to check all the PIP to report the pugmark. Who compile those datas? No one then why we are wasting so much manpower on this very unproductive practice?
Posted by Bandhavgarh at 11:35 PM 2 comments: