In this county we are not allowed to comment on any Judgement of any court. We are ordered to accept it with respect to Honorable Court.
Here I want to tell you about my brain how it thinks about all this.
As a country head it's the responsibility of Govt to provide and protect the employment of its public.
In this case no one thought about this  that how many people will loose their employment. As per Govt laws no other industry can come near the National Parks??
Posted by Bandhavgarh at 6:44 PM No comments:

Bharatpur is full of water this year. Good rain and water coming from all the available sources makes birds and birders happy this year. Unfortunately the bird nesting is not in that good numbers as I was expecting. First time I visited Bharatpur was in 1979,I was sent their  by my employer on a 2 week tour to learn more about birds. That year Painted Storks were breeding on every available tree. Trees around Shanti Kutir and Forest Lodge were full of them. Now one has to walk almost up to the last end of the straight road to reach nesting site, just before the temple junction.
I was disappointed with the weather. I reached Bharatpur on a sunny afternoon and got up next morning to a gloomy-cloudy day. Wet weather put all the butterflies away. There was hardly any photographable butterfly seen during my two days visit.
Other thing that disappointed me most was the growth of Parthenium hysterophus, a very invasive weed from latin america. It's leaves are like carrot so locally it's known as Gajar ghaas. White flowers equivalent to the size of floss flower makes it a truly nuisance for any kind of wildlife habitat. I wonder why this plant is 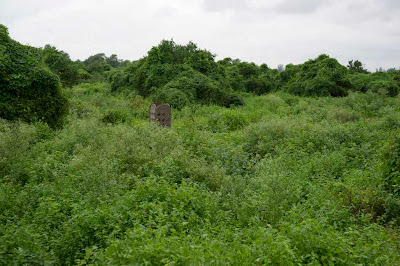 not uprooted in the beginning of monsoon. Now it will take minimum two years to remove it completely from the area. Other thing what I saw was other weeds growing in the area that was burnt last year. Fire needs to be used as a tool otherwise its side effects on grassland are always negative. Mr H S Panwar, ex Director Project Tiger wrote a complete guide book on grass burning when he was Director Kanha National Park.
I hope my next visit in December will be better than previous few years.

Posted by Bandhavgarh at 10:59 AM No comments:

I boarded the Gondwana express train in third A/C from Agra Cantt for my onward journey to Katni. I had a second A/C  RAC ticket for 9th September but cut short my stay in Bharatpur due to rain.

I wanted to get my ticket upgraded to second a/c but TC confirmed me NO ROOM while two attendants assured me to get a seat in second A/C. One of them did gave me a hint about his plan. I refused to accept his plan and came back to my seat in third a/c.
so here i give you the account of this compartment.
There is a family in our block who is travelling only up till Jhansi from Agra. Train has not even passed Agra station, I am waiting for people to give me some space to put my bag underneath and this person asked his wife to bring out some Namkeen. Poor woman has to do what she was told so she opens the bag takes out some namkeen, in the mean time kids saw biscuit packet so they demanded the biscuit. Husband asked her to pour some masala on it, she opens the jar of sainda namak,(rock salt). Instantly it reminded me my school days, standing in chemistry lab and our teacher Mr Dey describing the smell of SO2. Now man is happily munching his namkeen and kids are dropping the biscuit everywhere.Neither of them dare to pick those biscuit pieces from the floor.
My bag is too fat to go under the seat. I asked one of the kid to move his feet so i push it underneath. He asked me Uncle why it's not going? It becomes too fat at the time of journey back home, I replied. His cute answer was You must be wearing winter clothes that,s why it becomes so fat. Swiftly I agreed to him. He felt very proud by his findings.
Next cabin is turned in to a theater by a gentleman who is showing fellow passengers some film on full volume so everyone can hear and understand the dialogue. Even he put the extra speakers on it.
In third cabin all six people are playing rummy and their voice is disturbing the people watching movie and their argument is disturbing half of the coach passengers.
Linen bags are scattered all over in the compartment. Tea cups with tea bags are still sitting on table. I think this is Indian male habit who expects women to clear the rubbish and house women rely on House maid. So the place is never clean. This morning I was sitting in my brother in law's house in Agra. Their house maid moved the brush on floor without checking that how much rubbish she is leaving behind. Her major attention was on the kitchen call for tea. On first call she dropped the broom to have her long awaited tea.It took her more than twenty minutes to clean a room of not more than 100 sq ft. So we rely on our women and we (Indians) are use to of sitting with rubbish next to us.
A two year old kid wearing choon choon shoes is running all over in the passage. Parents are telling their co passenger that how cute she / he looks in this shoes.
We have just passed Dholpur. By now most of the passengers are settled in their seats. Women are busy in serving the food to kids and their husbands. Someone is complaining about AC. It makes cold food even more colder and another man is asking the attendants that his ailing mother is feeling cold in this airconditioner. Please ask the ac attendant to increase the temperature or put the blower. Someone suggested to provide her another blanket. Most of the Indian passengers in Third a/c or in some cases in second a/c do not have air condition in their house. They feel cold in train.
Food smell in the coach at this minute can beat any pickle factory. It's all pickles what we taste while eating our food. I wonder how many of them know the taste of Bottle Gourd (Lauki)? A vegetable rich in minerals.
Most of the rubbish is being pushed under the seats. So we have to now sleep with pickle smell. A lady is looking for her flip flop? They walked themselves for more than 20 feet from the spot where she put them, she blames passengers for not taking the notice of her flip flop but refuse to accept  her own fault that she did not put them carefully tucked under the seat.
Thanks god, the a/c operator did not put the temp. up. It's nice and cool on upper berth.
I am waiting for better connectivity of reliance dongal to post this. At last I posted it after reaching home.
Posted by Bandhavgarh at 10:15 AM No comments: