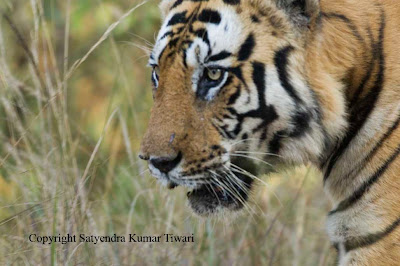 In 1997 we use to visit our land in Village Ranchha more often than now. Plantation was done and overseeing the work by was my main job. Sometimes I use to go on scooter and come back to Tala via Garhpuri. One such afternoon in April 1997, I heard lots of alarm calls at Thauni waterhole. I could see a herd of Spotted Deer looking towards the fire line. I knew that this could be tiger so I stopped and to have a better view stood on culvert.
Within few minutes I saw a tigress walking with something in her mouth. When she came in an open patch I could see it clearly that it was a cub. Within thirty minutes I saw her again carrying another cub.
This was a great sighting from the main road although she was 200 mtrs or little more away from me.
After reaching home I pass on this news to a photographer so he went to look for her next morning. Next morning me and Kay went on elephant to see them. We saw Bachchi lying in a cave and three cubs moving around her. They were not more than two weeks old.
Now out of those three male cubs just one, B2 aka Sundar is still around. He had a very good life in Tala Range of Bandhavgarh National Park an now he is on his last lag of his dominance.
I am sure to see him again after the monsoon but not in very good stage of dominance.
Posted by Bandhavgarh at 12:20 PM 7 comments:

Female cub killed by another Tiger

A female cub was killed by some other tiger in the night of 10-11 june. Forest Guards at Machkheta says they heard some tiger fighting in middle of night. Tourists saw some pugmarks of Tiger and drag mark on road. They found the tiger by following those drag marks.
She was bitten on her chest and right armpit. A portion of her body was eaten. Her intestines were out and all over her body.
Question is who killed her?
A female Tiger killed her or the male or its the dispute over a tiny kill with her brothers?
Her stomach was empty and full of worms.
In January this year I saw a tigress in Ghorademon. Everyone thought this is a new tigress in this area. But when Kay checked my photos she found that its Tulsi, Mirchhani female.
So whats she doing here. Far far away from her territory?
Has B2 become useless to serve her? Is she looking for a mate here?
Yes, later on she was seen mating with Shashi, Bamera boy, in Feb and March on Rampur road.
There was another female (Wakeeta's sister) seen by us but only once or twice in the season. So where she moved?
So many questions always remain unanswered by us. That's the problem in the jungle now, can't cover an entire stretch in one park round.
Posted by Bandhavgarh at 6:32 AM No comments:

Last night I was talking to Mr Saptarishi Sahgal about their Cattle protection Programme in village Damna. I was thinking about it in the morning again and I decided to go against the idea of Cattle Protection.
Last night when he was sitting at our place I just called one of my staff to ask him that how many Cows he have? Whats the use of them?? and How much milk they produce??
This was his answer in presence of Mr Saptarishi Sahagal.
About ten cows are there. We don't milk them and they are there mainly for cow dung manure. We feel lucky when they produce a male calf because that fetches better price in the market. He have less than 5 acre of land.
If he is telling the truth than this should be the answer of each and every villager of the area.
Now why I went against cattle protection.
Villagers are protected against their financial loss in cattle lifting by the government through cattle compensation.
If somebody wants to have ten cattle's then he should feel responsible for them. My staff said he pays 50 Rs per head to a person for grazing. He takes them out in the day to graze in nearby forest. They do not feed them in the night at home when they come back from the jungles.
Some people who get Wheat chaff feed them only after April otherwise they survive grazing in jungle. But most of the people do sell their wheat chaff for cash.
This is the same situation or worst than human population explosion. When people are responsible for their children then why not of Cattle too?
Here cattle are kept on Zero cost.
If we think on total economy of these cattle we will see that they destroy forest more than what one can imagine.
So what is the use of running a programme for cattle protection?
Its better to do an animal husbandry programme to improve the cattle breed for better milk yield which benefits the villager and reduces the pressure on nearby forest.
Villagers love to survive on subsidy so they jump on any scheme that gives them some sort of hand out.
I would like readers to put their comments on this. I will love to read some negative comments on this just to improve my understanding of village economy.
Posted by Bandhavgarh at 9:19 AM 2 comments:

Joy and sorrow of Journey in Indian Train.

Why I have to write about my train journey's? I asked this question to myself and answer is that I must write about the co-passengers behavior in the train.
I started my journey on Veraval express from Jabalpur.
Now I hate travelling in third a/c but its difficult to get the ticket on Tatkal in 2nd a/c. By the time server was connected 2nd a/c tkts were gone and so the only option was 3rd a/c.
The moment I put my bag to claim my seat I was requested to take upper berth. I found that behaviour very rude and refused. Minimum that passenger should have had some patience to let me sit down and then ask me what he wanted.
Opposite to my berth was a family with two young kids age 1 and four. Granny asked her daughter to feed those kids so the moment train rolled out of the station she started feeding them forcibly.
At Narsinghpur I went to get a cup of tea from the platform and when i came back I saw older child sitting vomiting.
We all asked that lady to clean up. Very reluctantly she cleaned it but was not very happy doing it in train.
God knows why she was feeling ashamed of doing it.
Everyone just gone quite and no one spoke to them for rest of the journey. Best part of this journey was that everyone slept quietly.
But my journey back home from Rajkot was not that quite.
My tkt was RAC no 1 means I have a secured sitting seat on side bunk of the compartment.
Two RAC paasengars are accommodated on side lower bunk. When another passenger came he did not had any idea about the RAC and he argued with me to vacate the seat. I could not convince him so I asked him to wait till the train conductor comes.
He was told by the train conductor what the rules are.
Posted by Bandhavgarh at 11:00 AM No comments: