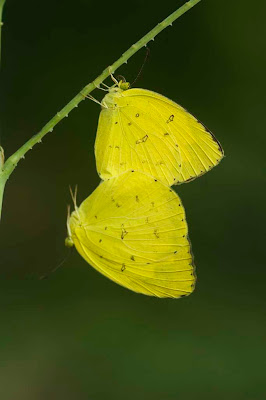 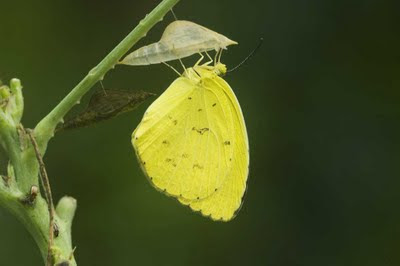 Very good time for grass yellows, Common and Spotless are breeding in the garden. I protected a plant with 20 caterpillars on it and planted it in a pot. In next few days I have to add few more plants to provide them adequate food supply. They eat and eat, within a week they started turning in to a chrysalis. For some unknown reason some of the chrysalises gone black in first few days but later on they seems to be normal.

Most of the butterflies emerged early in the morning. I saw more than 30 chrysalis hanging on different branches in the garden. I have photographed emergence previously so I was not interested in photographing them again. Just wanted a good record shot.

I photographed a Common Grass Yellow in the morning and left it hanging on the branch. By the time I come back from kitchen with my tea what I see is that butterfly with wet wings is already mating. Some opportunist found a good opportunity.

What is the main purpose of their life. Pollination and reproduction. But sometime reproduction activity starts first. Butterflies are very good indicators of the health of an ecosystem. We see their population growing year by year in our garden.
Posted by Bandhavgarh at 7:59 PM No comments: 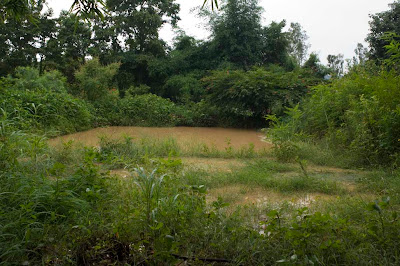 None of the staff turned up yesterday. This makes me feel that whether we should rely on them or not. In all these many years i have over paid all my staff even to those who left the job. It was a very boring day. Nothing worked. One of the labour got fever in the afternoon so mason didn't work in the afternoon. Other people who were suppose to finish the job of tiling the bathroom last week has not shown their face yet.

This all makes me sick. I don't like this place / village to live any more. For a very poor quality work with lots of frustration we pay them the same amount as the skilled labour charge in city, this has started affecting my life.

I don't want to tell you more and more that how foolish I was to choose this place for living. It looks fantastic to the visitor that how calm and quit place we have to live but no one knows that living cost over here is as much as living in any city like Bhopal or Jabalpur.

I warn everyone who wants to shift to the country side for peaceful quite life that they should rely on yourself only than you will have a happy life in villages.

I finished the arch and mounting the clamp on wall for creepers to run. It is frustrating when you see that people just don't have any confidence in you than you think that why bother doing all this if they has to raise the question without seeing it.
Couldn't sleep last night. Again I brought a cup of tea for myself at 2 am and spend the night playing with TV remote chasing decent channel. I saw sunrise from the comp. table playing free cell.
At about four AM it started raining and within an hour i could feel that pool is full. Ganesh gave the news with a cup of tea at 0610 that pool is full up till mango. I photographed it again. water was above 1.5 feet over the pool level. Kaans ( sacred munja) started flowering means if we beleive in traditional season signs then the monsoon is over. Now the water table on the land is back to its normal stage.
Sisy is missing since yesterday and the boy is missing since Mini gave birth to her two kittens on 17th. Mrs and her two kittens are still on the land. In the night our garden is takenover by jackals. A pair seen resting in the grass roam on the land. Most probably they have killed our 5 cats in last one and half month. Palm civet leaves their sign under the Papaya and Cheeku tree. They have finished all the fruits.
Posted by Bandhavgarh at 7:43 AM 3 comments:

This was the code by which she was mentioned in Kay's family tree of Tigers of Bandhavgarh. She was born in monsoon of 2004. Her parents Pyari and B2 still dominate their teritorry. P12 left Tala range with her two other male siblings in Dec 2007 and formed their teritory in Panpatha range. She was seen mainly around Bamera dam. When they moved to Panpatha two males did not found any resistance from any other dominant male to form their teritory and in a similar manner P12 never found any other dominant male to mate so she produced her first litter with the help of her own brother P10. Her first litter was born sometime in october 2008.
She was found dead on 18th August late Afternoon. Her three cubs are not seen with her so there future is still uncertain.
Another news published in UK says India has fewer than 1000 Tigers left. Cant say about it but one more is down for sure.
Posted by Bandhavgarh at 9:03 PM 1 comment: 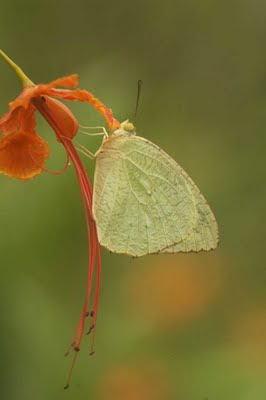 Photography wise last few weeks were very dull. Yesterday I saw a chrysilis outside our room. Today I put few plants in a pot to save some grass yellow chrysilises from predation. When i went to check that chrysilis I saw a butterfly hanging drying her wings. It was dark so I took some photos flash. But I was not happy with those pictures because at places it was overexposed due to moisture on her wings. So I removed the flash.
Later on I put her on small red flower and this is the result.
Posted by Bandhavgarh at 9:26 PM No comments:

Monsoon Monsoon i dont hear any sound of rain neither i see lightning. It looks as it is far far away from us. When I dont see sunrays coming in through window
Posted by Bandhavgarh at 7:22 PM No comments: