Winter mornings in Bandhavgarh are cold and with no tiger sighting in early hours it feels even more colder.We had one such morning last year on 5th Jan. You don't see much Deer or Monkeys in morning hours till sun really comes up and warm up the air. With lots of money in the budget and wrong policies of the management that demands the patrolling has put too many labour on park roads. These labour are major disturbance to the wild life. This disturbance is so big and effective that most of the animals have changed their habits. Now in early morning hours you don't see deer in any of the meadows of the park. Chakradhara has a constant presence of labour on bicycle and so the Lakhumar, Rajbehra and Bathan.
We were first to leave Hardia so we could have a dust free ride in the park. We heard few alarm calls at behind Lakhumar meadow but that did not produced any results. It was probably the presence of village dogs that scared the deer.
Rampur hill was as silent that day as ever before. There was hardly any sign of any movement of any tiger in the jungle today.
When we almost lost all our hopes of Tiger sighting for today a faint alarm call of a deer raised our hopes.
A tiger was walking away. She was Wakeeta. She set her clock well. She knew that this the time when there wont be anybody on road. She mean Bicycle not jeep. Tigers are more scared of a man on bicycle than people in jeep.
We followed her few meters and then suddenly she started sniffing a scratch mark on the ground. It was more than a day old, but she could smell it well and shown the flehman behaviour. It was her partner Shashi who walked here yesterday and left his scent mark on the ground. 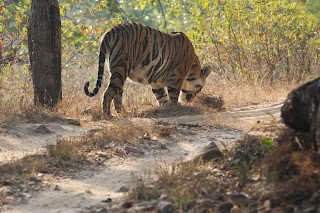 She followed her route and sprayed every where. Later in the year we found out that at this time she was already pregnant and delivered her cubs in mid to late March.

Posted by Bandhavgarh at 7:57 AM No comments:

in last November I spent a fortnight with some very nice people in Rajasthan. Jaisalmer was our first destination. Here I met The Lady Ms Meghna of Nachna Haveli. She has transpired this small Haveli in to a beautiful place. Her personal Touch was seen everywhere in the building. Everyone was praising the stay at Nachna Haveli. I wish if they had some control outside of their Haveli but one can educate those shopkeepers to keep the area clean. No foreign tourist wants to see garbage around. They are not use to of it and it's hard to digest the habit of throwing the garbage on street. Walking in some of Jodhpur gullies can ashamed any Tour Guide of the country. We walked in some of the most filthiest gullies of Jodhpur.
It was hard to keep people busy for whole day in Jaisalmer. In my opinion Jaisalmer, Jodhpur and Pushkar are the places of Hippy Era. People keep on coming back to same place made them popular on Tourist circuit. I met few people who are visiting Pushkar since 70's only because at that time they spent months here and now they visit only because they knows the place better. It is all word to mouth kind of job they are doing for promoting few destinations in the country for Tourism Industry. Now present marketing system has taken over and we see more tourists than ever at these sights.
We were looking for a picture in Jaisalmer and that kept us busy for most of the time. Climbing on hilltop or walking for sunrise pictures was great.
Other interesting place in Jaisalmer is dunes at Sam village. We stayed at desert Dungri and that was a mistake. There services are downhill in a year itself. I wont suggest that place to anyone ever.
Blue city Jodhpur was no different than last year. Although we were there just after Diwali but still finding nice blue houses was a tough job. People are friendly and many group members were invited us in the houses for Tea.State Archeology department in Rajasthan is not a Tourist friendly organisation anymore.
Pushkar was as colourfl as before. Only thing that changed the mood of Pushkar was begging. Now every person big small  finds himself poor in front of Photographers and demands money in advance. This was not before. If you starts paying as per their demand then you will find yourself more poor than them within a day. Even money was demanded for photographing camels. Too many photographers in such a small place has created this situation. Normal blief is that photographer earns lots of money from there photos but real truth that all those pictures can not be published through an agency until unless they have release paper. No one carries a model release form in their pocket, minimum I have not seen anyone carrying it.
Posted by Bandhavgarh at 7:18 AM No comments:

After a long long time we saw this kind of fog in Bandhavgarh. Chakradhara was covered in fog and fort hill or watch tower at Bathan junction was not visible at all. We did not see any animal till we reached Jhilki Nallah at Bathan. Ugly dead tree was looking most stunning in dense fog at Rajbehra.
Jaya and four cubs were seen at Rajbehra yesterday munching a Christmas meal of Wild Boar. We joked about Tigers that they all 5 must be sleeping on anicut bank so leave them till the sun comes up.
There were some nice photos of Foggy trees in meadow. 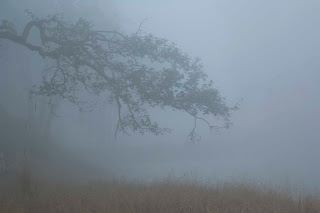 When we lost almost all the hopes of sighting a Tiger today morning, Wakeeta obliged us with a stunning sighting. If Rajbehra was empty then so the Mirchhani and so the Tamaria. Pushpraj, the male cub of Wakeeta from previous litter, has started following Tulsi in search of some meals. On one such occasion last time he got some beatings from his father but some boys never learns. So he was doing the same thing again and this time Tulsi herself told him to behave.
We passed Tamariya water hole, where once Andrew Parkinson saw two cubs playing in the water and deleted most of the pictures because he didn't liked the man made bank in back ground.
We saw a hand waving for us to come to their side. We slowly reached there to see a Tiger coming out of the forest. This was happening about 150 mtrs away from that famous house near the park road. 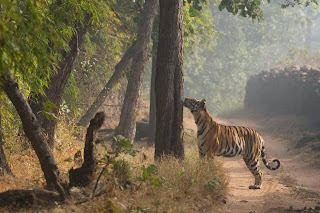 She came out on the road and soon some smell on a tree draw her attention. She decided to check it. That's what we wanted. In touristic terms she was far far away from us. We are really appreciate the behaviour of that driver who was seeing her before us for giving her a wide space to feel free. She sniffed the tree and knew this is not from herself but her rivals smell. This spot is basically not in her territory. She is in Tulsi's territory. After realising this she did not even thought of doing any spray marking on this tree but simply slipped away in forest to move in to her own kingdom.

Posted by Bandhavgarh at 7:10 AM No comments: