I just saw the pictures of Bamera male on an Indian website. After seeing these pictures and the report from my client from that Evening I am forced to say that YES I AM IN FAVOUR OF THAT PIL. If this is the behaviour people has to show in-front of the Tiger then YES WHY NOT THIS PARK SHOULD BE CLOSED FOR TOURISM FOREVER. These pictures shows that just for a photograph how close they can be so they can claim that I have it.
Everyone wants to be in-front of the queue.
It may not be any other thing but the behaviour of Tourist will certainly help the PIL.
I wish forest department and NTCA should look in to this website and findout the real truth of Tourist behaviour in the park.
Posted by Bandhavgarh at 12:06 PM 2 comments:

Gaur translocation from Kanha to Bandhavgarh

So finally Gaur are in Bandhavgarh Now.
Soon they will be major Tourist attraction here.
Posted by Bandhavgarh at 9:23 PM No comments: 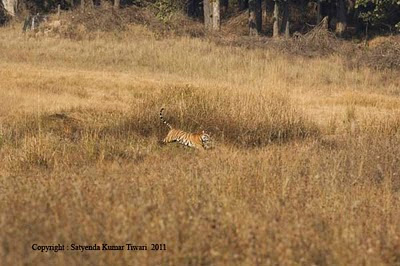 Two of our Guests were very keen to do an Elephant ride in the park. Tiger was not their objective but if he is there well and good. We reached Bhadrashila at about 0650 and by 0700 AM we were riding on Elephant Gautam.
Two other elephants were ahead of us following Sambhar alarm call means Tiger is nearby. This excited us more. We followed other two elephants in grassland to get a glimpse of a running tiger. Within seconds he disappeared in thick jungle. We tried to locate him but failed. Soon our elephant ride turn in to a proper jungle ride. Our ride time finished at 0900 AM and so of some other clients. These other foreigners complained to their Naturalist / Driver that for most of the time we were watching the bum end of this elephant walking ahead of us.
When you are sitting sideways on elephants than who asked you to look in-front of Elephant. Mahavat is doing his job. On elephant ride one is going through the jungle to see the forest. This is lack of communication / briefing / interpretation at the lodge. Unnecessarily poor Mahavat got blamed and the visitors didn't enjoyed their ride.
My clients were very happy to see the difference in the forest. Probably my presence on elephant as interpreter made the difference.
After we got off the Elephant our driver and guide said that they saw three tigers running across the meadow and still there is a chance to see them from the road. We came out on the road and we saw one running across the meadow.
Posted by Bandhavgarh at 3:24 PM 2 comments:

Vijaya AKA Kankati AKA D4 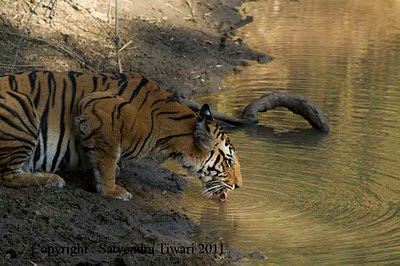 We saw Vijaya this morning. Her eye looks bad. She challanged Lakshmi and forced her to move out of her teritory. They are still fighting and had a good fight few days back where Lakshmi chased her out of Chorbehra but not for long.
I am putting all the pictures of Vijaya's wound on my Flickr account so if interested please check
http://www.flickr.com/photos/satyendraphotography.
Posted by Bandhavgarh at 7:01 PM No comments: 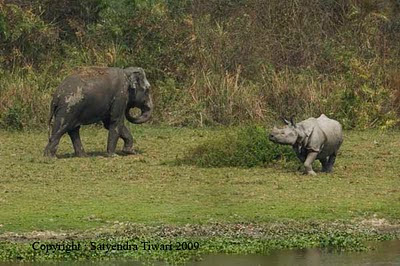 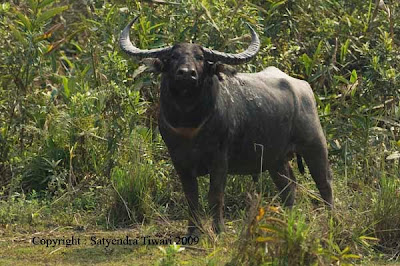 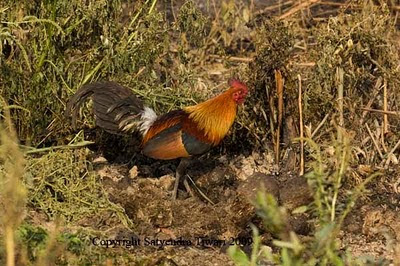 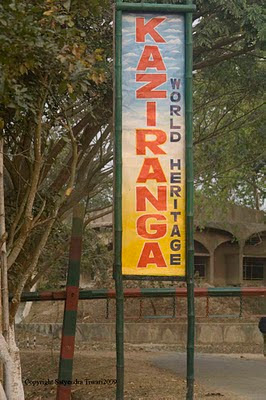 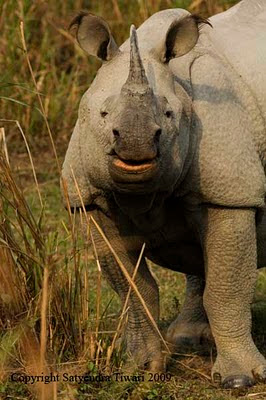 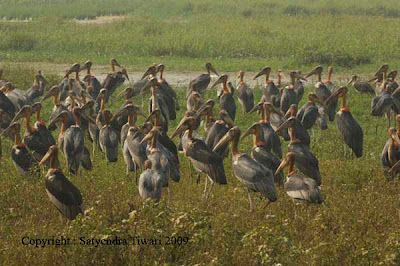 Kaziranga and only Kaziranga.
6 nights in Kaziranga will produce enough opportunities to see and photograph Big and Small game of Kaziranga.
This is a Tour focussed on Kaziranga Wildlife.
For itinerary and cost of the Tour please write me on skayscamp@gmail.com
Tour Leader Satyendra Tiwari.
Posted by Bandhavgarh at 4:30 PM 1 comment:

Photographic Tour to Bandhavgarh in April 2011 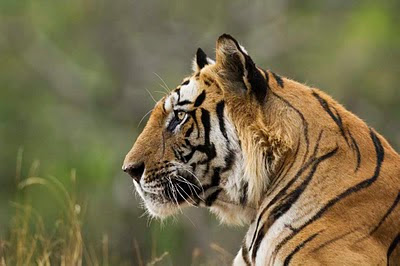 A Photographic Tour to Bandhavgarh in April 2011
5 nights 9 game drives in Tala zone of Bandhavgarh.
Tiger show is on since last week so encash this opportunity.
Group Dates are.
April 22nd to 26th.
For more details of the Tour write me on skayscamp @gmail.com
Posted by Bandhavgarh at 6:55 PM No comments:

It seems to me as some particular lodge drivers has indemnity for breaking the rules in the park. We often see them on wrong route or making short-cuts through illegal routes to reach particular spot before everyone.
Yesterday I was on DB route and after completing the route when i reached to Tiger spot on B route I found that jeeps behind me are already in queue way ahead of me.
I hope people wont ask me the name but watch what happens in the park.
I will love to put this on Facebook too so the normal tourist should know that what efforts were made by his driver and guides for his Tiger sighting.
At the Time of formation of TOFT we all thought now the Toft members will control their drivers and the situation in the park will improve but that thought turnout only a dream thought.
Posted by Bandhavgarh at 12:11 PM No comments:

Tiger density in Tala zone is all time high or just normal as it is since last few yrs in Tala range.
Tala zone is now of about 70 Sq km and it has these many tigers.
Three male Tigers but they are more or less using this area only for few days in a week. So Tala zone is only a part of their teritory. One sub-adult male is permanant resident in Tala zone.
There are 7 tigresses with their 12 sub-adult cubs. Out of these only two tigresses are using Tala zone only and rest visits the other areas also with their cubs.
So an area of only 70 sq km is explored by 11 adult tigers and 12 sub-adult tigers. The food requirement of these sub-adult Tigers is almost as good as of an adult. They all are 15 months + old and equivalant to their mother in size.
23 Tigers are looking for prey in a 70 sq km area.
Is there enough prey for them??
No no one has time to think about it. Lets count the Tiger numbers and feel happy??
Posted by Bandhavgarh at 12:33 PM 2 comments:

Today we saw P10 twice. Sighting this morning in Barua Naalaah was very calm and enjoyable. He was sleeping in sandy naalah and everyone was calm. Everyone had good opportunity to see and photograph him.
In the afternoon we saw him again. Not by any effort of us but by the information of other drivers and guides of other route. We were on B route and vehicles on D route saw him crossing the road. They knew that he is going to appear on Ghodademon road so everyone cheated the system and appeared on B route.
It was a chaos. Tourists shouting on drivers to go more close and close and I was shouting let him go up-till Ghodademon gorge so everyone can have a good view of him. More jeeps came from other side and this tiger decides to go off the road. We decided to leave him in peace and dont look for him any more.
Later-on he did appeared on gorge again and moved towards Banbehi.
Now the question is Will the Govt be able to reduce this kind of disturbance to the Tigers by raising the money bar more high up??
No.
Because again only the people will deep pockets will be able to enter the park and they will lure the guides and drivers to go more closer to the Tiger.
Guide Training by Toft did not helped a bit in this case.
What is the solution??
I still feel that in case if any driver breaks the rule the Lodge Owner, from where he brought the guests, should also receive a letter of warning from Forest Department.
Posted by Bandhavgarh at 5:58 PM No comments:

I would love to seeing it by my own eyes but what report I got this morning (11th Jan) from other drivers and Guides is as follows.
Some village dogs killed a Spotted Deer by chasing him to chainlink fencing near Mirchhani. A Tiger (don't know male or female but does it matter in this case, No) saw this happening from this side of fence. Dinu driver, Lala Guide and Namdev guide says that she jumped over with ease by resting her hind legs on fence, chase the Dog away to claim the injured Spotted Deer and walked away.
Jai Ho to chainlink Fencing and to its supporters.
Posted by Bandhavgarh at 12:49 PM No comments:

I am going to jungle since last 4 days and have seen tigers few times but none of the sightings were great for any kind of Photography.
Yesterday we were chasing B2's pugmarks in Ghorademon but after few kilometres we realised that he was well gone before we could realise.
Later we came back to Ghorademon gorge to hear the alarm calls from Vulture Nest junction. About 10-15 Spotted Deers were giving alarm call. We could see them wagly.
I think that was a female who was moving on the road at about 0800 AM and no vehicles to follow.
It was very tempting but I resist and stayed where I should.
Then guide started telling me the story that how many peoples have done that in the past. All the big names came under his list. All those people who claim big and honest on the internet were exposed in-front of me.
Best example of these people came from one of our friend when he was staying with his group in one of the posh lodge and Naturalist / driver took them off the route on a banned route to show them tiger cubs on a tree.
Great we didn't do that yesterday for a tiny little sighting and today our clients had a great sighting for more than an hour by themselves.
It does pays itself.
Posted by Bandhavgarh at 10:16 AM No comments: