Quite a few things happened in the park in last few days. Major activity was of arrival of more Gaur from Kanha. Now Bandhavgarh has total 49 Gaur, big and small.18 out side of enclosure and 31 inside.
Other interesting activity is of appearence of few sub-adult Tigers.
One male tiger of appox age 5-6 years appeared in Back of tala Range Mukunda male is constantly seen in Mahaman. Blue eyed male seen more often near the Tiger enclosure. A fight between some male Tiger and Yoshila (seen by villagers at around 6 AM) resulting Yoshila going on hills with her cubs and not seen since last 4-5 days.(Mahavat's story).
I think that dry weather has pushed these sub adult male in side the park. They might be surviving in surrounding areas till they lost the cover. We have no clue about the parental lineage of Blue Eyed male and this other adult male.
Summer will be interesting. Let's see who survives in this fight.
Posted by Bandhavgarh at 5:52 PM No comments: 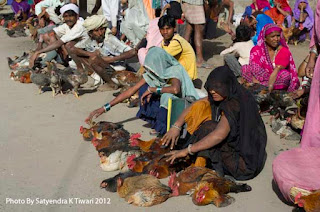 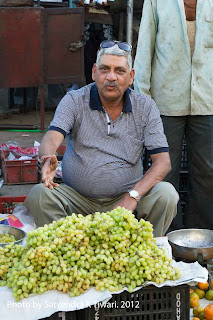 I never been to Alirajpur area and never seen these Bhagoriya Haat where boys propose to girls and run away with them in the evening.
My old pal from M.P.Tourism  Mr B M Namdev agreed to accompany on this tour. I left home on 3rd afternoon to board Bilaspur Indore Exp. I had my dinner at 7 PM at Katni and went to sleep. I woke up after about 4 hours to find that train is still at Niwar station since I went to bed. Engine failed. Another engine took four hours to come from Katni. Few mechanical things are out of control but taking more than four hours to send a replacement is failure of Railway Management. Niwar is only 5 kms from Katni and Katni has bigger Loco Yard than Jabalpur.
I reached Indore about four and a half hours late. Namdev must have had a very boring day waiting for me. We got a taxi from Indore and left for Alirajpur.
Alirajpur is a district head and most of the activities of Bhagoriya Haat takes place around here before Holi.
We reached Alirajpur at 1930 and retired to one smelly room of Sain Kripa Hotel. (Read about this in tripadvisor.in) By 0800 AM next morning we were on road again watching Tribals coming to Alirajpur. 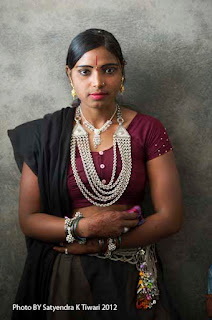 Most of these weekly market locally, known as Haat, are basically Trade markets where tribal brings their products to earn some money for shopping. Every women is walking with a chicken in her hand and some man with goat. Locals hounding these tribal for making a cheap deal. They are not good in bargain but often saw them refusing the money put in their hands. An average Chicken was sold in 300 Rs and goat about Rs 2500/  One man told me that most of our women work hard to buy the Jewellery. 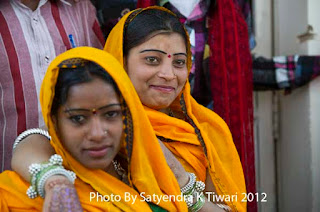 They love wearing jewellery on Bhagoriya Haat day. Mostly they were silver but heavy silver. I saw some girls wearing as much as half a kg silver or more on their body. For urban women 25 K jewellery is nothing but here it puts them in limelight.
We were eager to see how these boys proposes to girls or vise versa but that sort of things were absent. We asked about this to one of the boy in Sai Kripa. He replied with his moving eyes. "I married with one last year. I liked this girl and so the she liked me. We planned to run away on Bhgoriya day. On Bhagoriya day last year I ran away with her to my sisters house. We spent the night there and in morning sister phoned her parents. My brother brought your daughter here so come and negotiate. Boy's parents has to pay 100K in cash, 6 Goat, 6 boxes of Beer and 6 boxes of local booze. He recons that overall expenditure was about 150K."
Now they are happily married. She stay at home and he works in a Hotel.
I think its more of a story than actual happening there. Girls love make up. It may be the TV affect too. Most of the girls had their eyebrows done. Lips coloured. To show their close bond girls wear similar clothes to their friends.
Enjoyment of Bhagoriya haat is not fulfilled without a Palm Drink. All men and women had it. It's lightly intoxicated like Beer. Palm drink was sold only in two measurements. Either in Beer bottle or small quantity in cold drink bottle. A women selling palm drink did good business.
Bhagoriya haat was very well controlled by Police. Most of the villagers started returning home by 4 PM. By the time we came back at 05 PM Haat ground was empty. A cow was looking for some supplement food in heap of used plastic tea mugs.
Tourism activities in Bhagoriya Haat. --  I dont see any opportunity for good quality photography in Bhagoriya haat in this area. Villagers start coming only after 10 AM. That is too late for any kind of commercial photography. I see people using their cameras but that's all fun photography. I spent 2 full days for not more than 3 good photographs. I will never suggest any foreign tour operator to go their.
Posted by Bandhavgarh at 9:44 PM 2 comments: