In last few days Tiger show has started in bandhavgarh. Its just the Christmas new year rush. Wakeeta was under the Tiger show hammer constantly for fourth day. Today her mate also joined her and that was Shashi or Bamera male. Cubs are still very secretive. They dont like to see such a huge animal (Elephant) standing next to them. Soon they will gain the confidence.
Other good sighting we had was of a Sloth Bear. Last week a man was mauled in Gurwahi by sloth bear, presumably she was the same female whose cub was killed in a road accident on Manpur Road. Today I heard someone saw Saki aka Bokha limping near Mahaman?? Dont know how reliable this news is but if any one has any photo from today then please post it on internet.
Posted by Bandhavgarh at 6:49 PM No comments:

Winter makes life little hard for the cattle in most villages around Bandhavgarh National Park where people do not bring their cattle in the shed during night hours. Weak animals some time dies due to cold. One cow near park boundary died like that. Crows find that quick and Vultures followed them soon.  It's not only them alone but other scavengers  like dogs and jackals also got the news and they were there to get their share. Dogs kept Vultures and crow away from the dead cow so they were waiting for them to leave s they could land on the kill.
In this situation where Long Billed Vultures are sitting on trees waiting for the opportunity a Jungle Crow saw them as a big competitor for them.  He sat close to a vulture. Vulture did not object to this crow next to him. Probably he was not worried of a much smaller bird in size. Crow had different ideas. He started peeling the bark to throw it on Vulture. He tried but he could hardly throw it towards vulture. Vulture still ignoring his presence. Crow made some noise to offend Vulture but later he decided to take more physically. He knew that vulture has a much bigger stronger bill in comparison to his. Very cleverly he flew to circle the vulture and attacked on his tail. He was hanging to vultures tail but that did not hurt him at all. He tried few times to draw his attention but failed.
Now he decided to virtually attack the vulture. He lands on his back and started pecking on his back. This must have hurt the vulture. He turned back to bite the crow but crow was more clever than him. He pulled back himself out of reach of his bill but still sitting on vultures back. 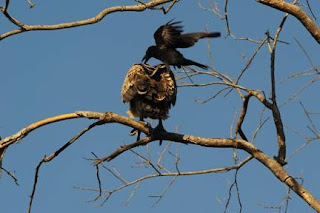 This drama kept on going for next 10 minutes or so. Vulture was pecked many times on its back by this crow.  He never had a second of peace since this crow came so at last he decided to leave. Victorious Crow followed him to the next tree but came back to his tree, watching dogs and jackal chasing each other for food.
Posted by Bandhavgarh at 9:14 PM No comments:

After reading Mr Ken's email and Dr Rahul's comment I feel guilty for not updating my blog regularly. I will try it now to update regularly no matter if I have to put only few lines.
Tiger sightings have gone down here in last few days. Main reason behind is Shashi aka Bamera male who is trying to dominate the complete 109 sq km of Tala range. On some days he is covering more than twenty km in one single night. Then there are two more young sub adult Tigers who are trying to hold the ground in back of Tala range. They are not shy but scared of people on foot and on bicycle which one can find in abundance in the park. NGO'S can help in running a lodge but by distributing shoes and jackets one cant ensure to save the Tiger. Its a hard path to follow. I am saying this again and again since last 5 years that Tigers will survive in isolated pockets of forests, those are called National Parks or Tiger Project areas and this population will be managed genetically. So our these two Tigers don't have any choice except to stay in this area until they face the real challenge of their life.
Grasslands are burnt in Bandhavgarh to get the new shoots for herbivores. Burning the grass in sandy soil???
There are few papers available on this winter burning by Mr H.S Panwar and Late Sh S.R Choudhary. Its a highly debatable subject but these people did made their point acceptable to all. 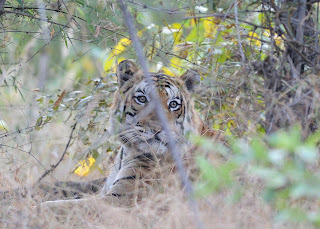 In last 10 days I saw these two young sub-adult tigers on two different occasions. In our opinion they are cubs from Mukunda area. There they were seen last summer. 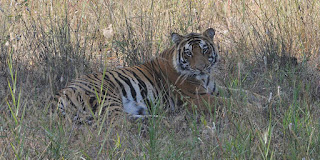 Other major activity that took place here was Kabir pilgrimage. This year more than 14thousand people were walking through the critical core area of tiger in Bandhavgarh.
It was a great chaos. Not a single animal was seen in Chakradhara Jamunia for next 4-5 days. Tourists who paid money to enter the premium zone were shunted to enter and exit from Magadhi entrance in the afternoon and after the morning game drive they lost a visit to Chakradhara meadow because they were asked to exit from Magadhi.
Poor Tourists. I have not heard any protest so far from any lodge owner but on behalf of my guests now I will protest and may ask for refund. 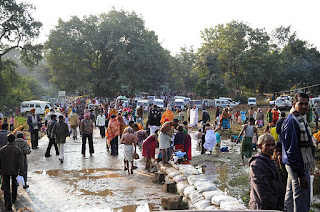 Posted by Bandhavgarh at 7:04 PM 2 comments:

Since last month I had no time to write anything on my blog or other diaries. On 21st Nov morning, we were asked to see a male tiger to help in its ID. We (me and Kay) went over there to see this tiger at about 08 AM. Rajkishor and co open the cage to show this tiger to us. I asked Kay to go inside the cage to see him. She came out whispering "That's boy Sundar." I tried to match him with other young male tigers photograph but none were matching. Kay left for home leaving me behind saying that is him. Some people find it difficult to believe that it's B2. After an hour or so Kay return back with another matching picture and now everyone accepts that its B2.
How he reached 100 km away from here is a story.
According to people there local villagers saw a Tiger moving in the jungle. They informed the forester in the village. Next day this information passed on to Ranger of that area and he also decided to have a look. But by this time this tiger moved away from that spot. People were looking for a Tiger like they are looking for a cattle. At this time he attacked on some villager. May be he went very close to him.
Information was sent to Shahdol and Umaria. Next day when search party from Bandhavgarh reached to the spot they found a tiger lying next to a stream. He was weak and his breathing was shallow.
There were more than 200 people looking at him making all sort of noises. this tiger even after seeing and hearing these people never made any attempt to look for a cover. He was still lying there. Search party saw him drinking water from the stream but he did not tried to move.
He was tranquilised and taken to Shahdol for further treatment. Later that night he died on his way to Tala.
He had so many wounds on his body. Some of them were so deep and big that maggots ate most of the flesh in side and there was so much gap between skin and flesh that one could put his hand like putting it in trousers pocket.
He died of his wound inflicted by some other male. Who it could be except his own son Bamera male. Once he got these wounds and getting weaker then every tiger must have pushed him from there area. In these conditions Tigers do like to move away to a secluded place but where he could find it. That's why he was found hungry tired near the stream where he was assured of water.
B2 is not the only Tiger that is being pushed by Shashi aka P10 aka Bamera male. Pyari aka Chakradhara tigress was pushed by him. Hope some people who saw them fighting in Chakradhara meadow opposite watch tower will remember how badly she was slapped. She fell on the ground and then did not get up for few minutes. Pyari sitting in grass snarling, growling on Shashi and he stood there staring at her made her to believe that he is the one who holds this territory. She left after this. Most of the time Tigers avoid physical fight. They settle their dispute by showing their power vocally and looking big in size. There are quite a few incident to prove this. Charger-Baanka. Charger-Langdu. B1,B2,B3-Charger. B2-Kalua. B2-Kalua's brother(I did not see this but other tourist saw), Babu- Indrani, B2 Chased by Shashi, Shashi watching Bokha mating with Lakshmi,  Shashi-Pyari (Was this to defend her cubs), Vijaya -Lakshmi's male cub (Vijaya avoids him).
B2 lived for 14 yrs and 6 months in Bandhavgarh. He became dominant male at the age of three when he sired a litter and for the next ten years he remained dominant male until challenged by his own son Shashi. 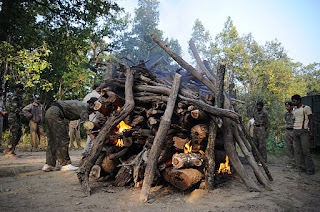 We will miss him for many years to come.

Posted by Bandhavgarh at 9:55 PM 2 comments: