Manglu just came in my mind. He is fit personality in present scenario where everyone is running after the degrees for themselves or others. People who have earned a name for himself through their hard work in their life also feels ashamed in saying that they were poor in education.
No one asked for any qualification to Haji Mastan?
No matter what he did but there was a long queue of all sort of people to get him on phone.
Even the people who dare to meet him in public due to their public image were put on hold on phone, and they happily accepted it. Other example is Sai baba type people. No one ask their qualification but all feel proud in touching his feet in expectation that Baba will put his hand on their back.
Through out his life Manglu was treated like a Baiga by his employers, even I was also one of them for a year or so. In those days there was always a new story from Manglu.
One of the Rangers wife gave Manglu the old dress of her husband. She never saw Manglu wearing that dress so one morning when all the staff comes to Rangers house to report the days work she asked him why don't you wear that dress?
I wore it one day then all these sahab log (staff below the rank of Ranger) started saluting me so I never wore it again.
Everyone had a good laugh except Nagpure who asked him Kyon re when did I salute you?
Another time in summer of 1979 we all went to Bamhani dadar to control the fire. I was with Dinesh Dubey. After the fire was sorted Panwar saab asked for water. By that time everyone finished their water. In those days plastic bottles were not available. Mostly whisky bottles were used to store water in the fridge. People use to carry that cloth bottle (Chhagal) hanging outside their jeep or water in a jerrycan. Only person who was seen with a gourd bottle (Tumdi) was Manglu. So Panwar saab asked Dinesh to bring his Tumdi. The moment Manglu heard this he started running. Dinesh never got hold of him that evening. Later on everyone realised thatManglu must hae been carrying his Mahua in it.
In those days a newly appointed IFS officer came to Kisli for his probation period for a month. Range officer Kisli invited him for dinner at Log Huts Kisli.
This officer, just out of enthusiasm, desired to see Kisli Range. Range officer suggested to get ready after breakfast at 6 AM and Manglu will take you to show Kisli Range.
This officer did not liked the idea of aving Sabji Paratha at 6 AM so he just had tea and met Manglu.
I am just portraying the picture of Manglu for the people who has never seen him in physical.
Manglu was about 5'2" tall man. Often he will just put one neck button in his shirt and rest leaves open below it he may wear Dhoti tucked above his knees like langoti. A small axe in one hand and Tumdi in other.
So Manglu accompanied the Sahab on Tour of Kisli Range.
To cut the story short at about 4 pm Sahib asked Manglu how far is Kisli from here?
Kisli is just behind this hill, we will be there before dinner.
Sahib decided never ever again go to jungle with Manglu.
Once Manglu lost his job from Forest department so we employed him in Log Huts Kisli . He use to walk in morning from kanha to Kisli and again after sunset he will walk back to Kanha. One day I asked him Manglu why dont you stay here in the night? Nahi saahab, My Mem Saab lives in Kanha.
We were speechless.
Manglu and his wife were a perfect couple who lived for each other. She use to brew Mahua and they use to enjoy drinking it everyday.
One day when we were in Kanha I called Manglu and introduced him to my Mem Saab Kay. After meeting Kay suddenly he ran back home to fetch his wife to introduce her to Kay.
When he came back he put on his dress and cap. I photographed him than and there 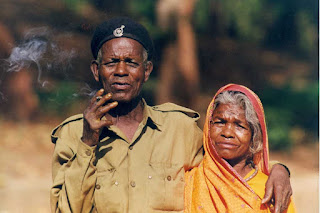