Few years back means at the time when same Tigress Tulsi was raising her second litter a man was killed and few others were injured almost at the same spot for the same reason.
People who live away from jungle cry a lot against the forest department and against the Tigers but no one try to teach villagers the situation that they understand very well.
Few weeks before I went on an Elephant during a Tiger Show to look for B2 as others were also available but I prefer him but at that spot we saw villagers man and women with children shouting and telling Mahavat where the Tiger has Gone. This was B2 who is so scared of human on foot that he left the area immediately. These people were standing merely 200 ft away from the spot where he was lying in river bed. Off-course they were on the other side of the fence.
Every Tiger doesn't behave like B2, that could be the reason of this incident.
Surely it was not mother this time (A women and a man killed by tiger on 23rd Morninng). It must have been the cubs who are seen sitting outside of the fence more than inside in last few weeks.
They have found that cattle are easy prey and few herbivores left outside are easy to kill than trying to make a kill inside of the fence. There they hit the fence and inside they run away in the jungle. So outside of the park became there preferable spot in last few weeks. Now they are showing their independence. They all have left their mother but their father is still seen with them in greed of sharing the food.
Last time it happened when villagers ignored the constant rumbling growl of the Tigress and at last she charged on one of them to get away from that spot where she felt cornered / surrounded by villagers.
Villagers should have remembered the daily scene that these Tigers can be any where in thickets. Since last one month Tourists are seeing them regularly close to the fence and i even photographed them leaping over the fence and villagers know their presence in that area very well.
Then why this happened? Does the poverty force them to put their life in danger??
Do we see that kind of poverty in that area?
How come a person living right next to the park boundary is thriving so well and others cant follow his example?
I am dead against of all these handouts given to the villagers. These handouts dont heelp them but makes them more greedy and lazy.
They treat us like idiots who keep sympathy with them in the name of Tigers.
I am living in this village since last 20 years and still waiting for a local villager who is willing to work. They all look for Govt work / panchaayat work where they get money for hardly doing and hard work.
This kind of incidents will keep on happening till the villagers will not understand the situation. We cant expect a Tiger to stop going to his favourite places in summer.
Now the situation is same as it was before. We have to learn and remember how to avoid meeting them out of the park.
Posted by Bandhavgarh at 8:12 AM No comments: 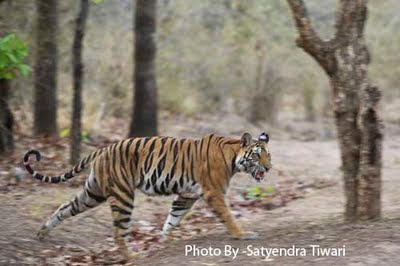 Somehow I am not able to write posts in time, feel sorry for that.
So next season Bandhavgarh will have a tigress with young cubs. She has a very poor territory as others do. At this stage she should not be seen going outside of the park when her present litter is less than a month old. At this stage cats do not leave their litter for long.
We saw Wakeeta near Banbehi, moving towards park boundary. Her teats are showing the presence of her new litter.
This is the first litter of this Tigress sired by Shashi, Bamera male. Her sister was also present in the area till few months back. Where is she now is the question? Has she moved out out towards Pataur?? Time will tell? She should also have the cubs by now?
Who knows where they survive?
We still dont know where Kalua is gone? or his brother?
Where these tigers breed outside of the park?
Many unanswered questions?
Anyway Wakeeta has future to survive here in Bandhavgarh for few more years.
Posted by Bandhavgarh at 7:08 AM No comments: 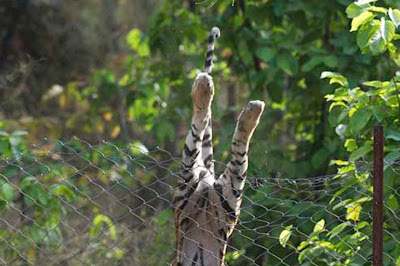 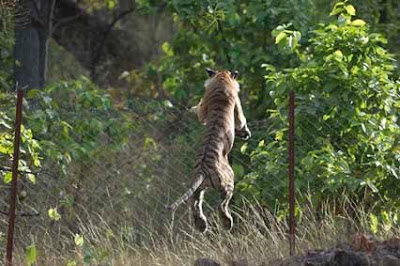 About 4-5 years back one of our friend photographed a Tiger sitting on road with a 4 inch long wire hanging out of his paw. I forwarded that photograph to concerned authorities and they simply denied it. Mahavats saw Lakshmi leaping over the fence and limping, this fact was never accepted and later even Mahavats changed their statements . It took me long time to be present at right spot at right time for this picture.
It looks easy but if you see the position of his forelegs and imagine when he will put his hind feet on the fence to balance himself for a friction of a second. Where he puts his hind feet and jumps is all a matter of chance. My picture shows fur flying all over around his hind feet while diving straight down on other side.
I still don't see those chain link supporters on FB now, are they there to see this? Will they please comment if this fence is useful for wildlife??
Park authorities has removed some of the fence from Dhobia Khol area. That tells us the whole story of it.
Posted by Bandhavgarh at 4:31 PM 6 comments: