In Jan 2002 Pyari's first litter sub adult cubs were still roaming in their mothers territory and diminishing her prey base in Chakradhara meadow.
One morning we saw Narangi, female cub, sniffing in tall grass. We followed her for 10 minutes or so and saw her cornering something under a dead tree.
At that point me and Kuttappan were not sure about the animal she cornered so we decided to stop far far away from them.
Narangi lowered her head and moved closer towards the log where this animal was hiding.
Suddenly we saw Narangi leaping back and started licking her nose.
She was scratched on her nose by a Jungle cat.
Her brother was watching her. When he realised that she is not going to hunt that then he came forward saw the cat and killed her instantly.
Those were the film days.
I was very cautiously using my camera. 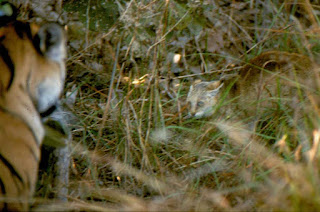 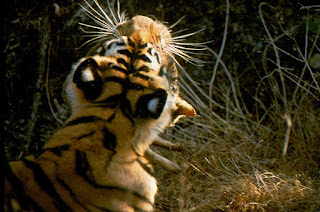 Watching whole incident through the view finder.
At last he just showed the cat behaviour of a kitten.
Tossing his kill in air.
Sorry for poor scan
Posted by Bandhavgarh at 6:29 PM No comments:

So after the photo session and meeting of his Mem Saab to my Mem Saab he started showing us the wound mark of leopard canines which he got somewhere near Chhatarpur.
A leopard was creating lot of trouble for villagers by attacking their livestock and keeping them shut in their houses during dark hours. Manglu said that such was the fear of the leopard that women and children were not allowed to go out and were allowed to pee and poo in the house compound.
At last a rescue team from Kanha was sent to deal with the leopard and decision was made to capture him alive.
Unofficially Manglu was Head of the Team because he has to chose the spot to put the cage and he himself has to set the cage and check it.
So one afternoon Manglu set the trap in that cage and while he was going to check it the Leopard strike. He charged him from the back and Manglu could feel his canine going deeper and deeper on his neck and cheek.
Manglu said I thought within minutes he is going to kill me so I must do something. I slipped my right arm over his paw and started strangling him with my both hands.
I knew I must press it hard so I pressed at the right spot and within seconds I could feel that his canine grip on my neck is going lose.
I saw my chance and pressed it more hard.
Now he withdrew his canine completely from the first grip here I thought probably he is going to bite me at another spot so I pressed it more hard.
Now I can feel his weight on my hands.
His forearms started drooping.
God knows from where I got the courage and power that I decided to press it more harder.
Now me and Leopard are standing face to face. He is of the same height as me.
I had no pain but I knew he did put his canine on my face because I can feel something dribbling to my neck.
I am holding Leopards neck and I can feel his total body weight in my hands too. His eyes are turning white. He is no longer looking at me. Saliva dripping and his tongue hanging on one side of his mouth.
Now I thought I have killed him so I threw him like a bag (the word he used was jhola) on one side and ran for the safety.
I spent a month in Hospital and Leopard must have learnt his lesson that day, Never go close to human.
We all had a big laugh when I asked him that they never let you drink Mahua in Hospital.
I photographed Manglu again and as usual shook hands with him before leaving.
Posted by Bandhavgarh at 5:35 PM No comments:

Today while going through my old files I found an undated note written aboput Indrajeet Elephant.


Indrajeet Elephant: This male Elephants tusk were cut in Oct- Nov last year on the instructions and supervision of Local Vet. From Manpur. Tusk were cut so deep that they cut the raw portion of tusk, very close to lips. Later this wound got maggots and Tusk had a deep wound about 2 foot deep in his tusk towards the head. This elephant is tied with chain in Hardia, away from tourism road so other people cant see him. He is in such a pain that he doesn’t allow anyone to come close. His food is offered to him by throwing it towards him.
He tosses his Roti on his back means he is not in a position to chew the food.