Rise and Fall of Bandhavgarh 6

Lodges which are doing false bookings are actually forcing small lodges out of business and increasing corrupt practices.
This is not good.
Big lodges do not improve local economy at all, this is being proven many times but because they have clout in the system so they get upper hands in every move of the management.
This should not happen any more.
High cost of entry fee has already removed local tourists (from near by towns) from the scene. People who are not able to visit the jungle only because of the cost are loosing interest in every conservation move.
Their thinking is "this is all for rich people's game so why we look at that side at all." (read why help in conservation of anything)
Some policies needs to change to save the interest of a genuine tourist.
In previous para I used a word "Local Tourist".
Let me put here what I mean with that.
In early 70's to till 90's people from nearby town and cities use to visit Bandhavgarh and when they have any guest they use to bring them here to show them a Tiger. Many people use to arrange family functions on saturday or sunday so they can visit Bandhavgarh on sunday morning to see a Tiger on Tiger show.In those days people from surrounding areas use to feel proud of Bandhavgarh.
I remember so many families from Satna, Amarpatan, Maihar, Katni, Jabalpur, Shahdol, Umaria,Chandiya, Birsinghpur Pali and Budhar who use to bring their guests here.
Mr Hasan the then Field Director (1981 -83)started a tradition that whenever there is a Tiger show near the main gate he allowed Tala villagers to see the Tiger without charge. Forest deptt, White Tiger Forest Lodge and Jungle Camp vehicle use to ferry the villagers.
Mr R.C.Sharma went a step further and allowed locals free entry and Tiger show in the park on last day of the season, 30th June.
This became a permanent fixture and only broken after the transfer of Late Sh Sumukh Joshi.
These things made a big impact on their (locals) mind and everyone was treating National Park as OURS.
Now we don't see that feeling in villagers heart or mind.
It's a big loss for conservation.
Now we see a completely changed behaviour of villagers. Till few years back villagers use to take cattle lifting as a simple norm in their life style.Then the N.G.O. started pumping in their pocket.
Only to ensure that villagers make more hue and cry for their cattle and they (NGO) stand there as their (Villagers) sole supporter.
This and the corruption made things worst for animals.
I must tell you that forest deptt staff never suffers from malpractices and villagers never wants any kind of wild animal around them.
So basically it's the NGO and some petty politicians made them greedy for the money and changed there thinking.
I have seen a film in which some big NGO working in villages around Bandhavgarh providing drip irrigation system to villagers is giving them only 16 mm or 12 mm pipe. They make holes in these pipe to run the water like a jet.
I dont see it as a help for villagers? I see it as a more help for NGO.
Film will bring more money in NGO's pocket.
So in all things are not in favour of wildlife.
People are going away from it.
Posted by Bandhavgarh at 5:57 AM 1 comment:

Caryl and Kenneth Sherman are with us since last few days. They were a regular visitor to this park from 1990 to 2006, every time staying for ten days.
They Got addicted to Bandhavgarh after seeing Sita and her cubs.
While watching Tigers Next Door film they remembered the days when we saw the Jungle cat with kittens in Rajbehra or saw the blind cub coming back from Garhpuri or blind cubs interaction with spotted deer.
One day in late 1990's they wish to buy Gohni meadow for the park. I talk to all villagers and settled the deal. They agreed to accept the money in Registrar office at the time of Registry. We were waiting for them in Registry office Umaria but none of them turned up.
Today when we were in that area I showed them the meadow which they wanted to gift to the park. I wish if that day that deal would have struck then things may have been different.
In early 80's when Mr Hasan was Director here he asked us to take our guest to Gohani meadow to look for Chinkara, neelgai and other birds. He did say that this is a private land and only to discourage the villagers coming close to the park we need to go out.
One important thing public can see here is park boundary and the Gohni gate. Both are built far away from park boundary.
Why?
Only to keep the human disturbance away from park boundary.
That was the one reason too why Mr L.K.Choudhary, Field Director put C.P.T. instead of Chain link fence.
Now we see villagers are invited to open the tea shops more than 700 mtrs inside the Gohni gate.
Now there is no chance for those foxes and Jackals to raise their family in Gohani meadow.
This is what we are doing with all the hard work of our previous Directors of Bandhavgarh Ntl Park. 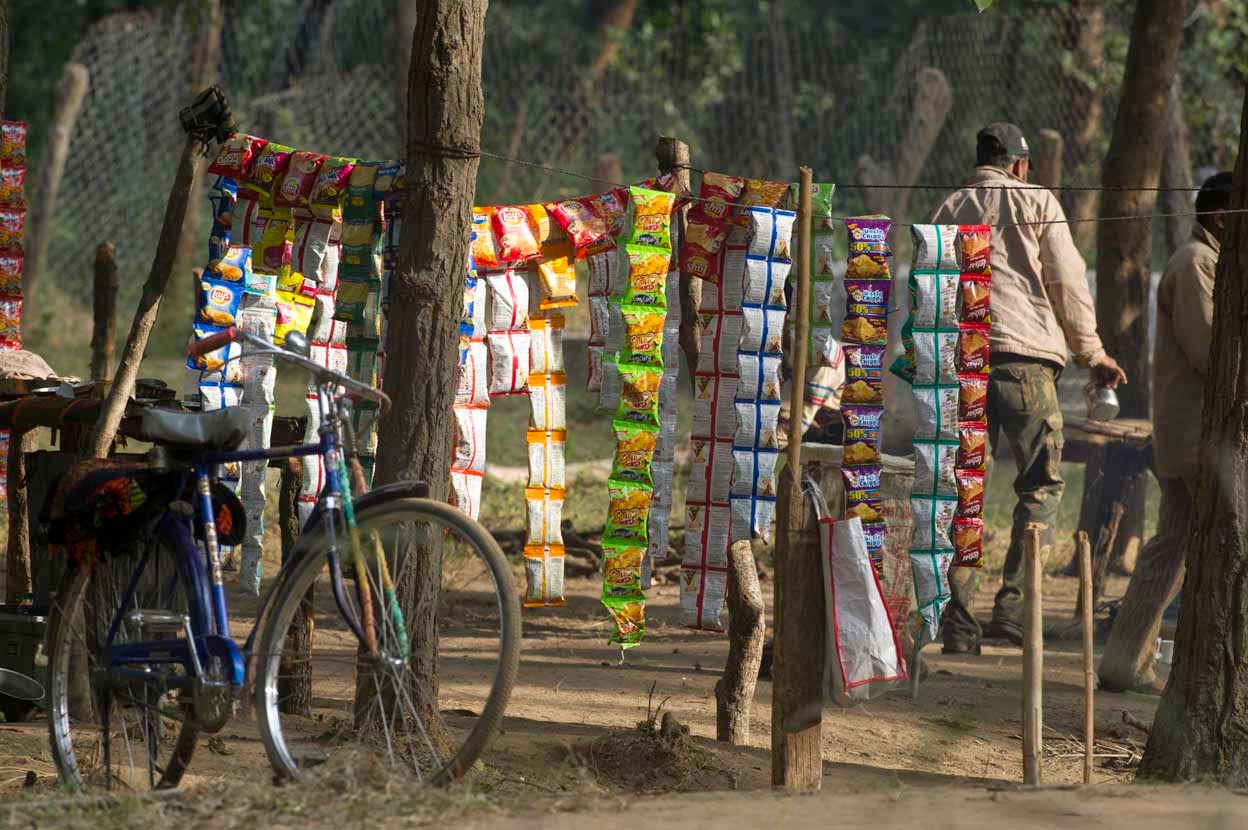 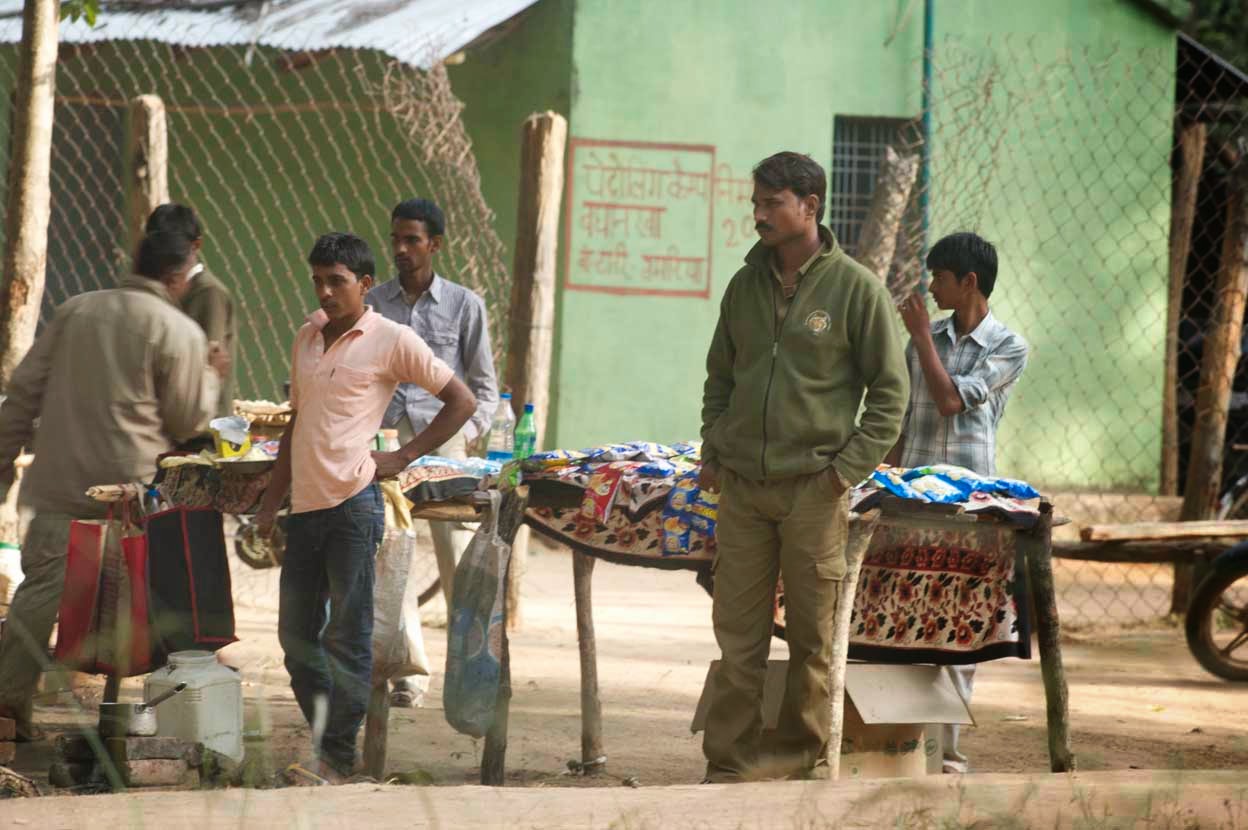 Posted by Bandhavgarh at 8:40 PM No comments:

Rise and Fall of Bandhavgarh: 4

Last year I discussed this matter with one officer that  after the retirement of Kuttappan Bandhavgarh is not left with any good Mahavat. So some Mahavat should be called here to teach these Characutters because most of them doesn't know the job of Characutter.
As it happens it never happened.
Yesterday while coming out of the park in the evening I saw few characutters taking their elephants to the forest to leave them for free grazing in the night.
What shocked me was that they all were hobbled at the gate itself. With the front legs hobbled they were chained to a tree on the edge of the forest. 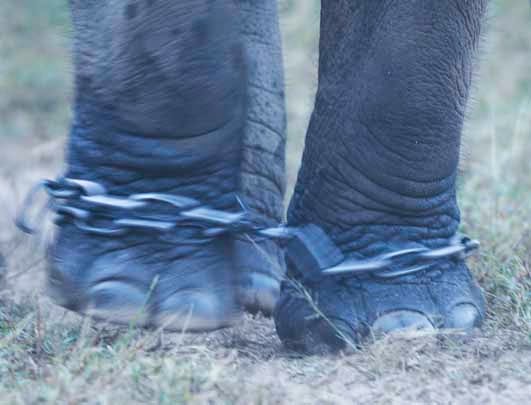 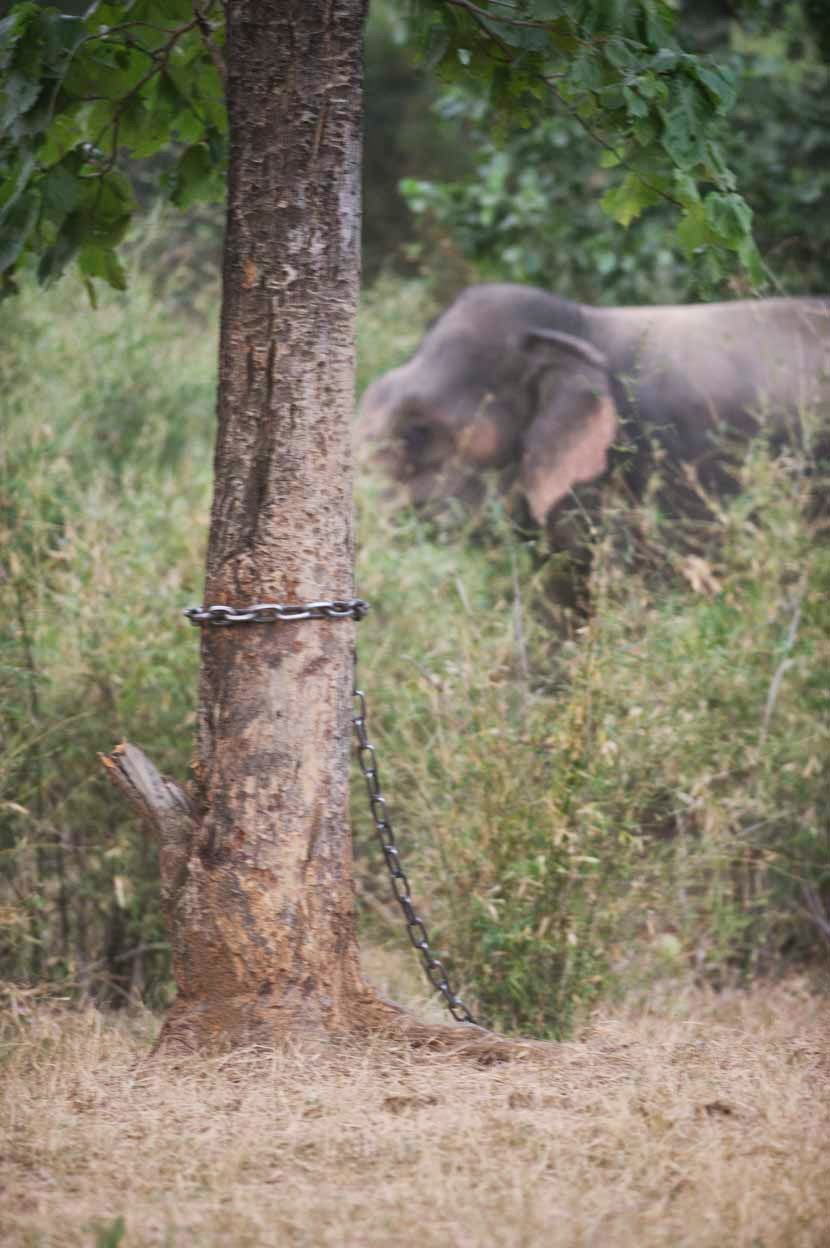 This was new method.
Usually they were taken to the forest and in the area they wants them to graze they hobble their forelegs and put a long chain in one of the hind feet to leave a drag mark on the road.
Characutter goes in the morning to the spot where he left them and follows the chain mark to bring them back to the camp.
I myself have done that many times.

Posted by Bandhavgarh at 9:47 PM No comments:

Rise and Fall of Bandhavgarh : 3

So another orderly to whom I met at Gulab Singh Deputy Rangers quarter during my Kanha years also inducted in forest services as Forest Guard. By virtue of his luck he got promoted faster than any other staff and by the time I met him here he was S.D.O.
I will cut this story short and tell you only about their behaviour that sometimes  how they try to please people to be in their good books.
At one time a female with her very small cubs was seen near vulture nest. Cubs were about a month old.
Most of the tourists use to wait for this tigress because she use to come on road in morning and afternoon.
One morning when we all were waiting for her to come out suddenly we heard an elephant coming.
Within minutes this S.D.O. saab also reached in his gypsy with some other guests and instructed Mahavat on wireless to come and take them on elephant to show these cubs.
I dont know who that family was but instantly I told him that this is wrong.
He left the place immediately but later sent the gypsy and that family went on elephant.
After reaching home I decided to call a person to whom I knew in Delhi and he had power to say something in park activities.
I narrated the story and he said  "You should have told him off then and there"
I said but now he is S.D.O.
He said So what his mentality is still of that orderly.
So this is another example what makes a park name better and worst.
Posted by Bandhavgarh at 9:19 PM No comments:

Rise and Fall of Bandhavgarh - 2.What a makes a place in to a beautiful National Park and what can destroy a National Park is the behaviour of that junior staff working in park. These can be Range Officer and below.Here I am narrating a story of two orderly (person who works in house as labour doing all house hold chores ) who were inducted in forest department services as Forest Guard.Anant Ram started his career as orderly in Kisli and later he was working Kisli Rest House Kitchen. He was responsible of kitchen and Housekeeping of those 6 rooms.An honest and hard worker is always recognised quickly. Mr B.R.Lowelekar, the that time Field Director of Kanha Ntl Park saw talent in him and appointed him as Forest Guard.Anant Ram was over the moon.Now he had the authority to order some one. This is the joy he enjoyed the most at that time. Manglu was jealous of him. Manglu as Shikari was always a daily wage labour.One day we were in Mukki and saw some people walking down the hill.Guide and me agreed to stop and wait to see who they are.These people were walking down the hill without any fear as we could hear them.At last when they came out what we saw was Anant Ram bringing down a burning log from the hill.He came straight to me and after exchanging the usual greetings he narrated the story.Saab this log was burning since last two days but we found it today. we didn't had enough water there and nor we could bury it there so decided to bring it down to bury it in this sand.Me and Kay looked at each other.What to do was the question so we gave them all our breakfast water and usual things what I always did for Anant Ram.Other time when we saw him he was cutting a burning log for the same reason, bury it. It was summer so Anant Ram was in a more comfortable dress for the season. Last year when I met him he had two stars on his shoulder but his working behaviour was not changed a bit. Long Live Anant Ram. 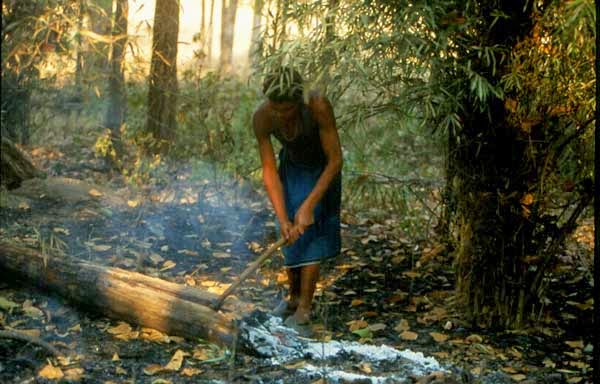 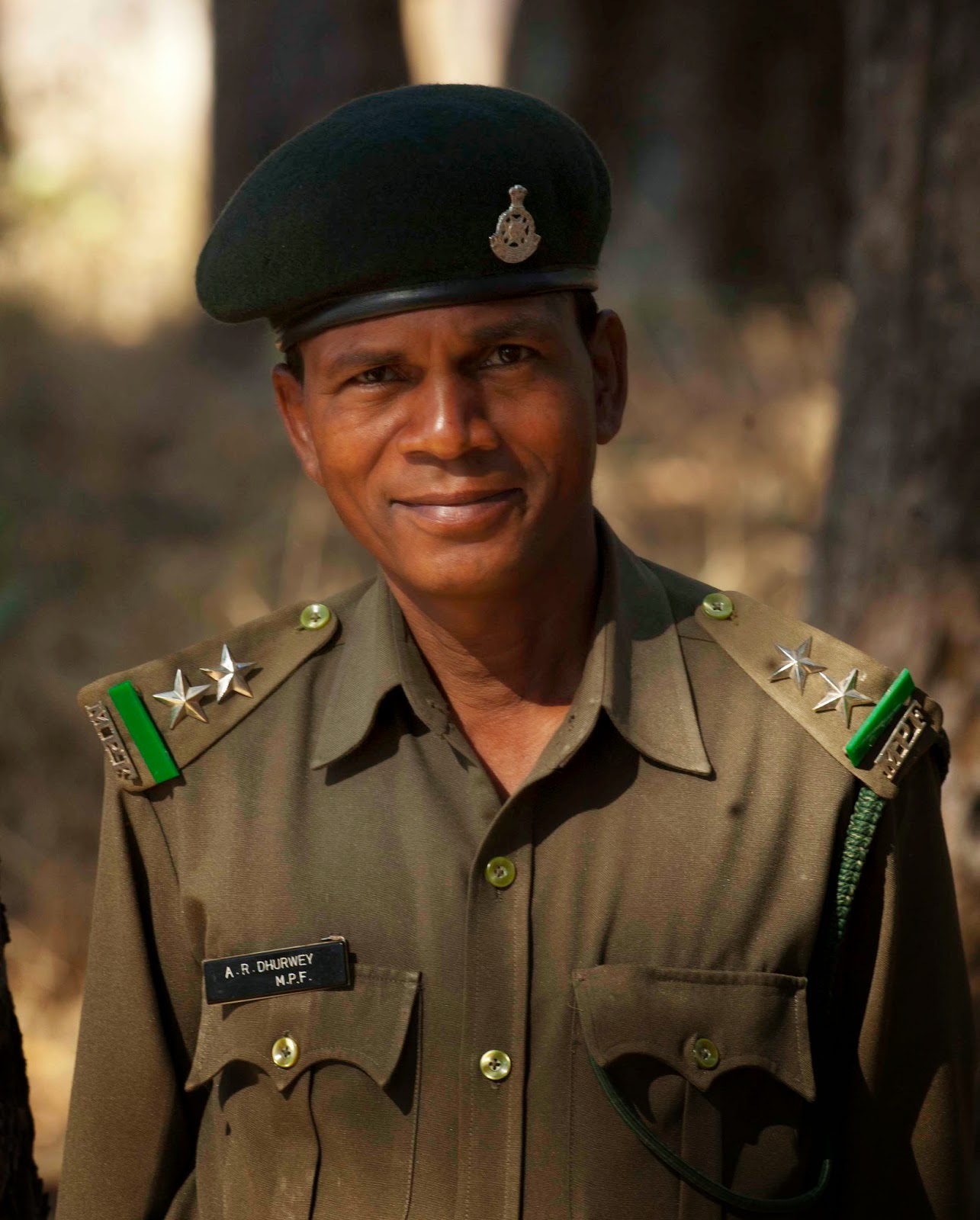 Posted by Bandhavgarh at 9:05 PM No comments: