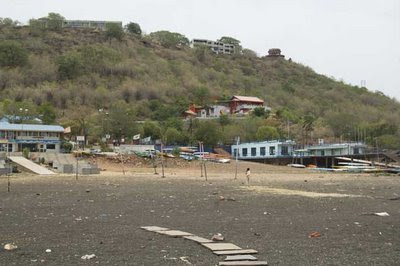 Last time when it happened i missed to record it on camera. But this time I decided not to miss it so I went to Bhopal to photograph upper lake. Only few months back i enjoyed a boat ride in Upper Lake. I walked on all most part of lake looking for different butterflies and flowers. It was hot and so hot that even butterflies decided to hide in shade.
Upper Lake is not that deep as I thought. It could be interesting to walk around after rain to look for insects. I photograph some rare butterflies from that area previously.
I had not seen my mother since jan. Recently she was seriously ill. Her lungs doesn't work properly. In simple words they lost their elasticity. After her retirement she stopped working in the house. Two daughter in laws and two grand daughters were always there to serve her food and tea on bed or on sofa. She spents her day reading news paper, Ramayan, Gita or watching T.V. So literally no physical excercise of any sort. Now she is so unfit that cant even walk few hundred metres.
I feel soorry for her. I asked her repeatedly to reduce the weight but she never listen to these suggestions that cut her food. She is fond of good eating and so the her brother. We all laugh on this.
My two younger Brothers, Devendra and Omhari, visited Somnath dwarka and other places in last winter. Now Hariom decided to do the same route with his family and mother in law. Munmun enjoyed walking on beach.
My train journey to Bhopal and back was horrid. waiting list no 2 ticket in second a/c never got confirmed. So i had to travel in passenger train up to Bina. Similar thing happened in return journey. My ticket was RAC means sharing side lower bunk with another passenger. It was tiring. Learnt a lesson Never buy any waiting list e.ticket.
Posted by Bandhavgarh at 8:19 AM No comments: 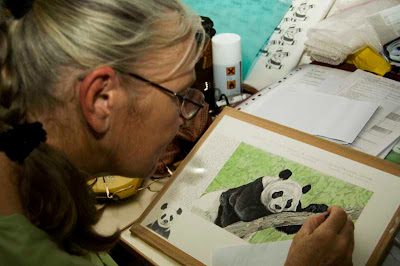 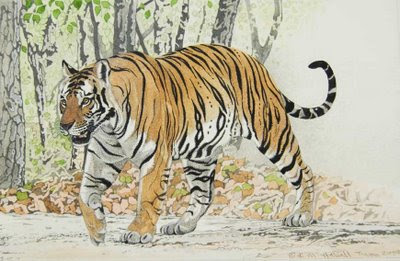 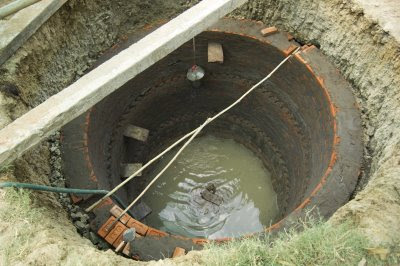 This summer was very productive for us. I could finish the well on our land that we were thinking to put since last 4-5 years. Rainfall is decreasing year by year. Since last 4-5 years winter rains never happened. This makes place more drier on our land. We don't want to rely more on bore well so what we needed was the good open well.
First 7-8 feet was easy digging in clay soil then comes the stone. It was hard. Labour agreed to work on contract but just in two days they realised that it doesn't worth. So came back on daily wages job. That is more headache for me. I have to make sure that labour is happy and they are willing to finish the job. But Mahua season disrupts my plan and everyone goes to collect the Mahua. They don't earn that much money from that but that easy earning lures them. It was hard to find the labour in those days. I had to simply offer them more money to work.
Mason was paid throughout the time since February to supervise the work and keep on looking for labour every week. But after all this whole work needs supervision. I had to physically sit there to supervise the work.
Tendu Patta and Chironji season were other two great obstacle to increase the well cost.
Now work will be finished in next 2-3 weeks. A Fish Pond to recharge the well in monsoon is also ready. Hopefully we have solved our water problem for next 50 years. Any amount of rain is welcome to fill the Fish pond to recharge well.
This summer Kay was very very busy. She worked about 10 hours a day regularly for May and June and on some days even 12-14 hours. Still a lot to do. She has not started anything from this year sightings. Diary needs to be completed. Lots of backlog work for her. She is just completing Giant Panda. It takes time and concentration. Everything needs to be 100% right to create the work atmosphere in the house. Cats disrupt few days work. Yesterday morning one of the kitten was found bitten injured, covered in ants and unconscious . Other three missing. We brought him
in the room. Kay cleaned his wound and put him in the box. He is still lying there alive but unconscious. Other kitten found dead yesterday evening is buried under Kathal tree.
Other two missing kittens came back this morning. Our pet cats and wild snakes on the land keep rodent population in control. Now we know why Blindy gone missing. Must have been attacked either by Tom Cat or Jackals who comes on land in the night for water.
No mangoes on the land this year but plenty of Papita (Papaya) and Cheeku.
Posted by Bandhavgarh at 10:31 AM 2 comments: 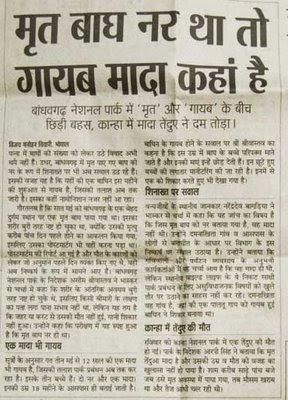 On 8th May morning a guide informed me that forest department have taken some guides and other people to Banbehi probably to show them a dead Tiger. It looks like as Banbehi female is gone, he said.
Later on I got the news from different sources that a Tiger is found dead near Banbehi. First news was that it is Banbehi female. Later on news came that it is a male probably the other sibling of B2.
Next day on 9th the Post Mortem was done. Guides and Drivers told me that it was clearly stated in presss conference that it was a male Tiger.
Later on one day a labour, in presence of a Mahavat and a guide, who saw all this told me that "
On 5th May they saw a tiger lying next to a rock and three cubs sitting around her. They knew that this is Banbehi female with her cubs as this is her teritory.
Next day again they were on the same route and they saw the same situation but this time a cub saw them and charged on them. They ran back to camp.
Third day on 7th they decided to go on same route thinking she must have gone by now but no she was lying there alone in same position.
He said "To check her we stonned her. She did not move. We climb on a close by rock to see her. Her mouth was wide open, teeths were showing. We could smell her dead.
We ran back to the camp. Now 5-6 people came inclusive of forest guard. We checked her she was dead. Forest guard send the information to Tala Range Head Quarter.
Park Supdtt and others came to check her late in the evening, just before dark"
First two days account shows that it was indeed the Banbehi female. Rajvardhan Sharma, Nature Heritage Tala told me on phone that it was a male, some genitals were clearly showing, This can be verified through my and his mobile phone recordings.
Now the question is, if that was a male then where is the Banbehi female??
And if that was a male then why her cubs were sitting with him for two days??
If that was not a female then why she is not being seen with her cubs since then??
Posted by Bandhavgarh at 8:51 AM 1 comment: 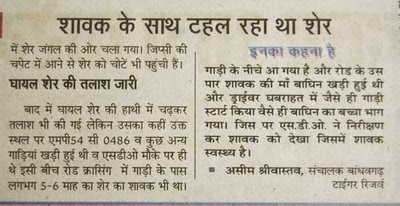 This piece was published in Raj Express Hindi News Paper from Jabalpur on 23rd April.
Posted by Bandhavgarh at 8:21 AM No comments:

I am back and with thumping force. I will say to all of you that i dont want to say my story to all of you as it is in the court so better i defend myself there. If you
Posted by Bandhavgarh at 8:13 PM No comments: