Some very immature wildlifer challanged my observation about prey base in Tala range. He says that he saw hundreds of Deer in Chakradhara and Rajbehra meadow. In his opinion Prey base is more than enough for the Tigers in Tala Range.
Now the question arises that if there is enough prey then why this tigress dont stay in Chakradhara as Sita or Pyari use to do?? Similarly why Jaya is not seen in Rajbehra??
This morning Shashi was seen coming back in Tala range. Some people saw him near Siddh baba. Later tourists of Tala zone saw him near Jamuniya.
Few weeks before he was seen  eating a cattle behind Tala village. Has he done the same again or he was looking for a company with Nalini??
Danbar Brander has written about cattle kill in his book Wild animals in central india.
" The great mass of Tigers are partly cattle killers and partly game eaters, but some animals living in forests such as are found in Mandla and Balaghat, where game is very abundant, hardly ever kill cattle. On the other hand many parts of the province now contain little or no game, and in such places the Tiger lives on nothing but cattle , and follows the herds about as these are shifted for water and grazing. In tracts of this nature tigers are particularly liable to develop in to man eaters."
I will say that this statement tell us the true story of Bandhavgarh. The reason for cattle lifting is very much proved here.
Now what we are seeing in Chakradhara and Rajbehra is the case of No Tiger in that area. If you see these herds minutely then you will find that more than 60% population of Spotted Deer is of  about 6 months old. Means fawn born after October 2011have increased the population. Survival rate of these fawns was almost 100% due to constant absence of all predators. We have not seen Jackal in Chakradhara meadow since last 2 season. And one should forget about Dhole, Wolf and Leopard in Chakradhara meadow.
Posted by Bandhavgarh at 12:21 PM No comments:

This is the case of high tiger density and poor prey base in the area. She lost her second cub on 12th March 2012 night on the dispute over a cattle kill and this one got killed on a Sambar kill on 9th May.
My brother Hariom was in the park that morning and he brought the news that a tiger cub is found dead in Sukhi Patiya area. He photographed a cub on 7th evening. Next day he photographed Blue Eyed. Some tourist saw a Tiger sitting behind the bamboo, barely they could see some stripes, Forest labour checked and they saw a Tiger sitting so they ran for their life.
On 12th Morning Elephant people found an carcass, half of the body was already eaten, remaining body fermented due to heat. It was difficult to find any stripe for identification. Maggots were dropping. they were already about a cm long. 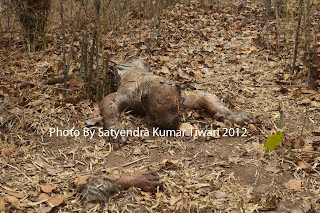 Yoshila had three cubs in her first litter. One female and two male. Female disappeared in last monsoon, one male got killed in March and second one in May. So this is what happens in nature.
Posted by Bandhavgarh at 10:14 PM 2 comments: