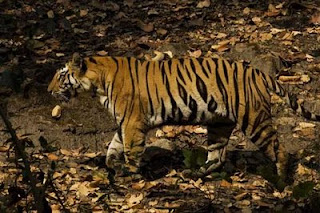 Not a very good day. Attack on Sri Lanka team upset me more than Tigress trans location from Bandhavgarh to Panna.
Watching Sangkara playing is always a fun. He is one of my favorite player. When they play against India I support my favorite players in both teams.
So a Tigress called P13, according to Kay's chart, is sent to Panna. Forest department tried to kept everything very secretive but everyone knew that one tigress is going from here, other one from kanha and male will be from Pench.
I hope she will have a better life there. Here in Bandhavgarh she had very small teritory and if we beleive the papers written on Lions and Leopards than she was very much stressed out here. In comparison to other females she had smallest teritory in Bandhavgarh. She was always pushed by three different tigresses. She had two visiting Males. New male who is her brother is trying to prove his dominance on females. His presence in the area make them tense.
I talk to few scientists and other people in UK and US about her situation and their opinion is that in this kind of situation Cats do not conceive for a long time. It could be true she is 4 yrs 6 months old being seen mating more than 15 times in last two years but without any results so far. Today, is she preganant? No one knows.
This trans location has raised all those questions again. It is the same story as it was in Sariska. Sariske was a high profile case. Govts do not have any interest in these cases.
People are still talking about Sariska and Panna.
People wants to know the answers of few questions.
1. In June 2008 M.P.Forest Deptt. was claiming a healthy population of 21-42 Tigers in Panna
and in August September they started talking about skewed population of Tigers in Panna then what happened in those three or six months?
2. Did they showed the wrong figure of 21-42 Tigers in June 2008?
3. If that is true then who manipulated the figure?
4. If the figures were not manipulated then Why forest department did not conduct an inquiry on missing tigers from Panna?
5. By either way to whom they want to save Tigers or Officers in charge?
6. There is a rumour that lonely male tiger is not seen since last 2 months in Panna then what is the security of these tigers when they get released in Panna.
General thinking of Public is that when they could not save those then how they will be able to save these? Only the time will tell us the truth. Too early to blame or speculate.
People in Kanha went on strike this morning. Park was almost closed for tourism. They showed unity better than any other members of Tourism Industry in India. Hats off to them.
there were rumours that CCAfrica was involved in this operation. While coming out of the park we saw their jeep and Kay asked them were you involve in this operation. One boy in that jeep stood up showed hid T Shirt and said yes we are and we are very proud of that. I thought he did not under stood our question so I asked him in hindi and there comes the reply NO- NO and BIG NO.
I pray for her safe journey. Hope god will not treat her like he treated Barasingha's 27yrs back.
Posted by Bandhavgarh at 9:23 PM

Hi Satyendra, just wanted to know who CCafica are? The only reference I find is for a luxuary Safari company.

Now I've found your blog I shall be following it.