When I say that this wild elephant capture programme was unique in many sense then really it was. There are so many stories which needs to be written about this.
This elephant was the most naughtiest in all for breaking the wall. His footprints were smaller than the other big tusker and his footprints were more common around the houses.
He was the caught in mid september and in October he was put in the corral.
Mr Mridul K Pathak the then Field Director of Bandhavgarh Ntl park use to visit Corral almost every day and every time he went to see them he use to feed them Jaggery or Roti by hand.
His stewardship made new mahavats to work with new, unknown, temperamental elephants.
His only order for them was to win them with love.
Staff worked hard to achieve these goal and results were very positive and were seen very early.
In two months time Mahavats were telling me that they can go inside to clean the corral and for dressing of their old gunshot wounds. 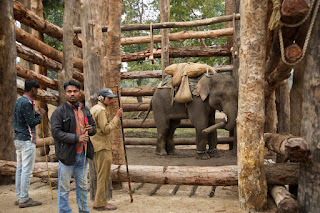 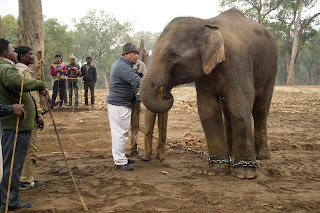 One even offered me to take his picture inside the corral but I refused.
In less than four months time this elephant is brought out of the corral.
You can see a houda on his back with sandbags.
This all was done when elephant was in corral.
After his release he walked around and then his hauda was removed.
Within 40 minutes of his release Mr Pathak was feeding him by hand.
This was confidence and faith on that animal.
This was a great achievement in elephant training.
We know in other states the elephants were treated so badly that court has to order to release them back in the jungle.
Initially when he was put in corral he tried his level best to get out that corral and in that process he broke his left tusk.
In May I saw him standing next to a tiger.

its obvious some patients with Herpes Virus are being enslaved to the antiviral and other supplementary Orthodox medicine just to help suppress the virus and not a cure. I have been with the virus since 2015 until I was introduced by a blogger who also narrated her story online on how she was cured of HPV after using Dr ALUDA Herbal Medicine. This is a year and 2 weeks since I was delivered from Herpes VIRUS. All thanks to God for using this Great herbalist to heal me. I have promised to keep telling good things about Dr ALUDA. Please feel free to share Your problems with him and don’t forget to tell him I did refer you to Him. Thanks. email him  Draludaharbalhome @gmail. com He deals with Alzheimer virus, Cancer, HIV, Herpes, Genital, warts,Multiple Fibroids, ALS, HBV, UTI, Virginal infection, Genital, Wart, HPV, Hepatitis A/B, Good luck, HSV,  Cold Sores, Diabetes 1 & 2, Pregnancy, Ex back.