Bandhavgarh, Tala and Magadhi on 1st and 3rd October 19

We were in the jungle on first october morning in Tala and on third morning in Magadhi.
First morning in the park is always for photographing landscape and wild flowers to add the collection of last 25 years or more.
First thing which we wanted to photograph was this waterfall from fort hill which we were seeing from our land since last many days. This waterfall is from fort plateau. 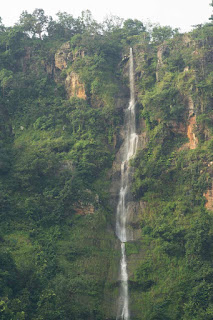 Some of the areas got the grass which was sowed year before last and this year it was noticeable. Hopefully in next few years it will bring the glory back to normal as it use to be 15 yrs back.
All those sand bunds which were made in 2007 and 08 were washed away. They were completely wrong but it was very difficult for next few Managers who knew that these will do nothing except to increase the silt in downstream. They had no option except to maintain them. Luckily nature cleaned them this year but stream is full of silt.
Two of these were at Damnar river at either side of the rapta and few in chakradhara.
What surprised me was half filled Gopalpur and Sukhi Patiya pool. 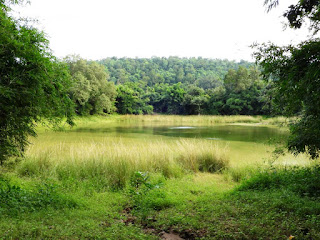 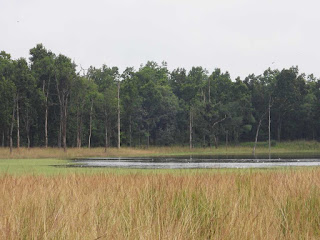 According to my guide Premlal that day last year water was on the road at Sukhi Patiya. Looks like the feeder channel at Gopalpur was filled with silt early in the monsoon thats why Gopalpur did not receive the September rain water. I know the Mahaman pool channel was not cleared last year so this year question does not arise to have enough water in it but still it looks good.
In Magadhi that Verma forester was again on job with all his sincerity as usual. His work around Charakwah pool is showing results. The barren land was full of grass so much that saucer was not at all visible and nor the pool banks. 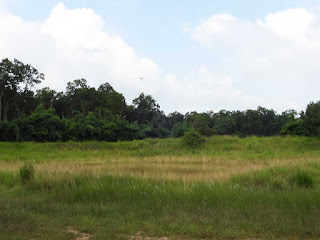 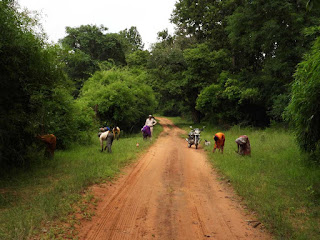 Vishnu was as usual good and I hope the grass on vishnu statue won't be scrapped. It's a sandstone and scrapping the grass with wire brush always removes some layer of the statue too. When I see my picture of Vishnu statue taken in 1982 then we see more decoration than now on it's head. 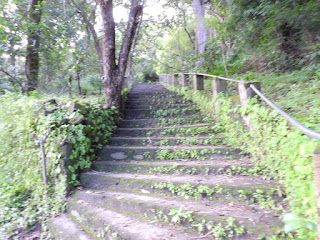 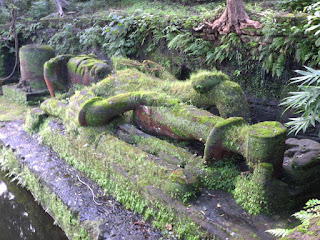 Last years labour work, taking the soil for road repair from rocks, in Tala Jamunia shown the effect. Now we see very low density of Begonia plants in Jamunia rocks and the same at Sita Mandap. 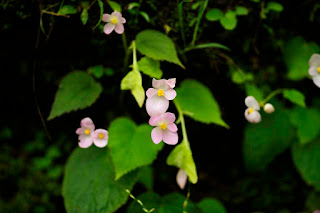 Glory lily plants were not as much as last year. It could be due to excessive rains in September months. Even the Glory Lily in our garden has died. 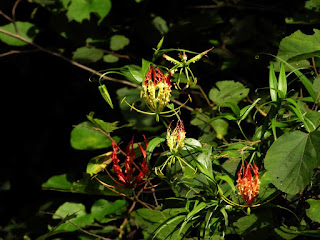 Tiger situation looks pretty good.While we were watching two male Tigers chasing each other in Magadhi at the same time Xena was seen in Tala. Kay saw the pictures on social media and she thinks that Xena is still single means no cubs. Is it due to Tiger conflict in her area. Hardly any work is done on cats in INDIA. Why they do not conceive when they see male Tiger conflict in her area and they mate with both the tigers. We rely on papers from Natuaral History Museum London or some other work done on similar subject on different cats in the world and think they might be behaving the same like other cats. Laxmi was a live example for this. 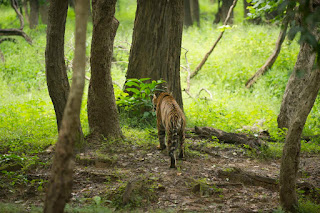 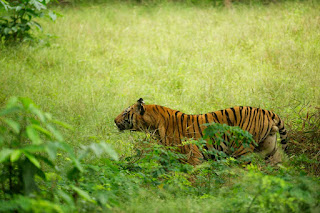 We wish that these bloody NGO's which have no brain except money which is collected from innocent people will not suggest anymore Solar water pump in the park. If the rain water harvesting is done properly then there is no reason of any water shortage in the park. Animals are happy to drink from a pit instead of a pool. Any running water or spring is good enough for them. And in sandstone hills there should be tons of springs as I have seen in the past. They just needs to be clean to solve the problem.
Posted by Bandhavgarh at 6:11 PM