Meadow management in Bandhavgarh in 2016-18

In November 2016 I was told by the then Field Director that Spotted Deer Population in Bandhavgarh is well beyond 55 thousand.
I did not ask him to tell us the cattle lifting figures also of the previous years but we all knew that sign of their presence were not present in the park.
If park has 55 thousand deer then we should see the rings around bamboo clumps. They will feed up to the height of 5 feet so clumps should be more open in the bottom and Tigers should not rely on cattle.
Other thing which we did not see in the park since Mr R.C.Sharma left as Field Direcor was Spotted deer rut in March.
If we see the old papers of Forsyth, Danbar Brander, George Schaller , S.R.Choudhary and H.S.Panwar they all mentions that major rut starts in March and finishes off in June, after the few monsoon showers.
They all relate March rut with winter burning of the grassland. George Schaller mentions in his book that till mid 1960s the grassland of Kanha were burnt in Nov and latest by Christmas.
This use to provide fresh fodder to herbivores for whole winter and resulting the rut in March.
One day when the then Field Director Mr Mridul K Pathak, Mr Abdul Alim Ansari DFO, Mr Rishi Mishra ACF and me were sitting and discussing this meadow burning he said that I understand it but in present scenario we are not allowed to burn the meadows.
Then think about cutting the grass and long and wide Firelines.
He said yes that's the vival option but we have to look for funds which are scarce at the moment.
The suggestion came to look for grass cutting machine.
We found one online and I ordered it for the park.
Within a week the work started.
People had no clue what's happening in the park only because they could not understand it. This was a long term plan for making the mulch all over the grassland to retain the moisture.
Soon he saw the favorable results of it . Soon the new shoots attracted the deer in fireline and most of the animal started gathering in a small area.
According to S.R.Choudhary and Panwar this is important for creating a competition for healthy gene transfer for the future.
This practice continued in 2017 and 18 too.
I will cut short this story here and would like to mention the name of Mr Suresh Kumar Mishra, a retd DFO from Odissa who was incharge of Simlipal, Satkosia and other reserves in Odissa and was a Wildlife trained officer. When he visited this Park in February 2019 I showed him rut behaviour of Spotted Deer in Rajbehra meadows.
This picture of Rut behaviour was taken on 9th Feb 2019 in Rajbehra. 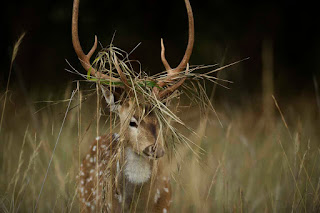 Later on one day in end of june ,when I was with Mr M.K.Pathak along with Mr Shrivastava Vet Dr from Jablapur, he showed this to Mr Shrivastava that most of the females were looking pregnant and he agreed to it.
This was the achievement means major rut was in March which we saw starting in Feb.
Since then many people commented on social media too that in comparison to last few years they see a better population of Spotted Deer in the park.
Posted by Bandhavgarh at 7:20 PM