After coming out of corral and showing his skill of understanding the Mahavat's command he was offered food first time out of corral.
This is the best way to feed a captive elephant, Mr Mridul K Pathak said.
You can see here Roti and Jaggery in his meal.
By this way the number of roti he gets per day and amount of jaggery gets embedded in his memory. 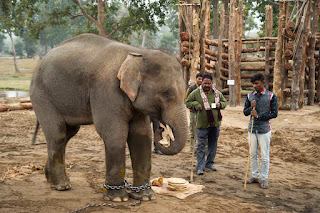 Just within less than four months he became such a docile animal that here the mahavats are standing just having a stick in his hand. I have seen them working in corral it was simply the Tender loving care of the staff which made him friendly towards human being. No doubt this was all possible under the stewardship of Mr Mridul K Pathak. The new boys were appointed to work with these new elephants and very soon they develop a rapport between them.
There is a story from Bori from 70's about elephant feeding.
Hopefully Dinesh K Dubey will tell us because this was told us by his father, who use to be CF Hoshangabad in those days.
Posted by Bandhavgarh at 8:13 PM

Sir tell me who is father and mother of t23 tigress who recently died at age of 17 at bandhavgarh.

its obvious some patients with Herpes Virus are being enslaved to the antiviral and other supplementary Orthodox medicine just to help suppress the virus and not a cure. I have been with the virus since 2015 until I was introduced by a blogger who also narrated her story online on how she was cured of HPV after using Dr ALUDA Herbal Medicine. This is a year and 2 weeks since I was delivered from Herpes VIRUS. All thanks to God for using this Great herbalist to heal me. I have promised to keep telling good things about Dr ALUDA. Please feel free to share Your problems with him and don’t forget to tell him I did refer you to Him. Thanks. email him  Draludaharbalhome @gmail. com He deals with Alzheimer virus, Cancer, HIV, Herpes, Genital, warts,Multiple Fibroids, ALS, HBV, UTI, Virginal infection, Genital, Wart, HPV, Hepatitis A/B, Good luck, HSV,  Cold Sores, Diabetes 1 & 2, Pregnancy, Ex back.