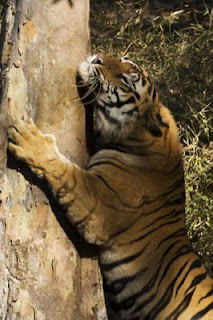 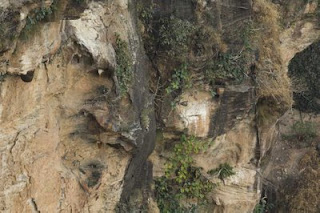 Digital photography is time sucking. After a good morning in jungle hardly gets any time to do anything else. I had few surprises last week. Biggest was Quarterly sell letter from one of the photo agency. Two Tiger pictures sold in America got me less than a hundread rupees in total. Raw cost of entering the park is more than two thousand Rupees. Forest department has increased the rates for Elephant booking for Photograpic permission for three people, fourth will be forest department employee on elephant with photographer but god knows for what, is Rs 40000/ per day. I dont see any photographer to recover that kind of money from Tiger photographs. I found that butterfly photographs can fetch better money than Tiger.
Last week few villagers confessed killing of few Tigers. WPSI crack the poaching racket.
A male Tiger that left Tala range last year in Dec came back in the park. That is not a very good news. His return raises a question. Either he found poor prey base out of the park or area more disturbed so he decided to come back. Cats do have memory, good memory.
I photographed this tiger few times in last few weeks. Face and body stripe of this Tiger matches to Tiger photographed last year.
Vulture population is again down this year. Few vulture nests on southern and northern side of fort hill are abandoned. Last year vultures were nesting on these cliffs.
today I saw more fencing to be erected around Tala range. What is happening. Is this the conservation policy?? It looks like as these people got influenced by the Management Plan of South African National Parks. There they are mainly fenced. But their area is huge. We cant compete with them. By this method soon Bandhavgarh Ntl Park will become a Glorified Safari National Park.
In long run big cats will suffer with in-breeding problem. they are in-breeding now. in Bandhavgarh, B2, the dominant male tiger carries 50% genes similar to four other females he mates with.
So his arrival back in the park is not a good news for gene pool.
Last week we were talking with a Park Director from Spain. He didn't see enough prey base in the jungle. At present we have 7 breeding females and three males in Tala range. All these seven females are with cubs. So for food consumption we count total 20 adult Tigers in Tala Range. So according to various Tiger specialists i.e. Late Sh. Sankhla and Saroj Raj Choudhary and Mr. Panwar if a Tiger needs one adult chital per week for his survival then approximately 1000 chital or other adult animals are killed per year. Apart from Tiger we have Leopard, Jackal, Wolf and Dhole. Jackal kills more fawn than adult animal. Do we have that kind of reproduction in prey base animals to sustain this Tiger population??
Idea of Saving the Nature for next generation does not suites me. I say that why you are fighting a lost battle. It is important to control the human population only then we can think of Saving The Nature and Natural resources for future generation otherwise future generation will kill them all for their own survival.
we had very good Tiger sighting today. I was not carrying any memory card with me so I had to edit some photos to create the space. Kay said that after a ong time she saw a tiger climbing, scratching and biting the tree.
Hope i have not bored you.
Satyendra
Posted by Bandhavgarh at 8:21 PM