Elephants and Tigers in Central India.

Using elephants for Shikar was a part of every royal hunt in India. Most of the Maharajas, even when they did not had enough forest for keeping elephants in , kept the elephants. I think there must have been some ego also involved in it like the Gun salute in England. More you pay better you get the respect.
Kanha got their first elephant from one of the Maharaja and in Bandhavgarh Maharaja of Rewa had an elephant kept in tala for his visit to fort and for hunting Tigers.
Presently most of the national parks in M.P. are using elephants for patrolling and for tourism. Even when elephant is used by Tourist they do some sort of patrolling in the park. Finding some tigers in the park while sitting on elephant back ensures 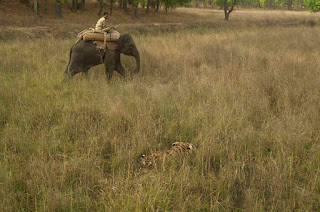 the survival of that particular Tiger till that day.
In India Bandhavgarh and Ranthambhore are the two parks where most of the Tigers comes under weekly patrolling and forest department knows about their wherabouts for sure.
When we asked them about Tulsi which was not seen in the park for two years we were told that she is surviving in Buffer but we never believed it only because our thinking was that if alive then some day this tigress would have come in core area, in her old territory.
After two years when we saw her inside the park, in her old territory we believed them. This time she came only to look for a mate. Once her purpose was solved she again went out and next we heard was that she has three cubs in buffer zone.
Elephants were sent constantly for whole monsoon to patrol her area and that ensured her cubs survival.
It's the patrolling in last three years time which has put Bandhavgarh as one of the most important park in the country. Tiger numbers here are the best in the history of Bandhavgarh and best in India too.
Last season total number of tigers (including cubs) seen by tourists were about 90 and the figure for this season should not be less than that.
Which other National park in the country can claim it???
Posted by Bandhavgarh at 8:32 PM