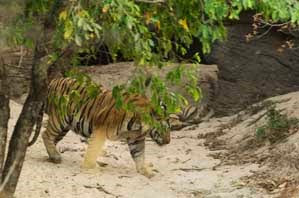 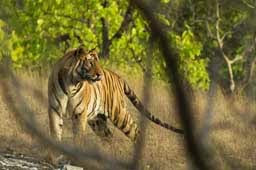 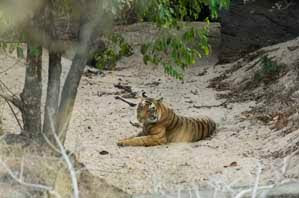 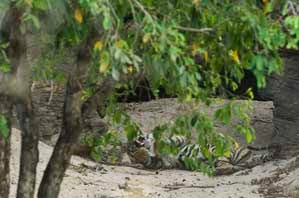 Last month someone showed a small clipping to Kay about B2 dominant male intimidating a young Tiger named Kalua. We also witnessed this day before yesterday. B2 was seen devouring a cow inside the park. Later on he moved towards Ghorademon. When we saw him in early afternoon his one foreleg was visible in the gorge. At about 1715 hrs a young male about thirty months old alo walk in the same gorge. He was shocked after seeing his father the dominant male of the area sitting there. He sat down instantly and freeze his movements. We heard only one Tiger growling, so probably that was B2. After few minutes B2 got up and started circling this young male. Moving towards him he snarled. Young male got up and moved backward. He was petrified. He lay down in submissive position. He was so petrified that he urinated. B2 charged on him, circling him again and again and after a roaring sound he came out of the gorge.
Young male sat down in fear, expecting new attack from his father, he kept looking on top. B2 walked for few minutes on the gorge and sat on top of the gorge.
We left them in that position. Next morning B2's pugmarks were seen miles away from the last sighting place and young male also disappeared.
This young male had very unfortunate story. Few weeks before we saw him in his mothers teritory. That day when he saw his mother coming down off the hill he started calling her like a cub. She came snarling and told her off. So poor chap is being told off by his both parents.
That is life our kids needs to learn. Once you become adult leave the shelter and make your own home. A daugter is better than a son minimum she will leave you after 25 -30 yrs but if a son becomes useless he will torture you till death.
Posted by Bandhavgarh at 7:53 AM

Hello sir,
Do you mind sharing that clip ?