Janmashtami, it could be last for pilgrimage.

This year Janmashtami was a very low profile celebration in Bandhavgarh. Pilgrims were allowed to go to temple only up till mid day and they had to return before sunset. That was routine even in previous years.
Bandhavgarh witnessed heavy rain on Janmashtami night and morning. Pilgrim rush was low in the morning but increased by 10-1030 AM. But it was too late for many. Once the forest deptt shut the gate at 12 Noon may of pilgrims were looking for an alternate temple to prey. One local person Bramhan by caste just saw the opportunity and started the prayer under Banyan tree near Tala gate where a Shivling is based on a platform. Within minutes he was performing the duty of a priest. That was a great excuse for many pilgrims to offer their prayer. He console many souls. 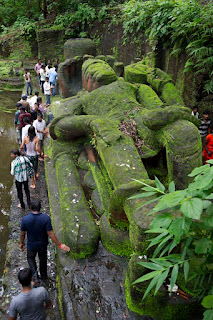 What I found this year was that there were not more than 5-7% devotees in the crowd rest were picnickers who came here to visit the park / temple because it is free. Most of them were trying to go through shortcuts and trying to have bath in the park. They thought it is a good theme park but were controlled by watchman. I walked with my wife Kay and had to literally (physically) teach the lesson to minimum 3 boys. I came back with a broken umbrella.
I doubt things will be the same next year. Gopalpur pool is not even half full.Chakradhara still looks dry. No Kaans flowers in Chakradhara this year and nor at Thauni. No Tiger was seen by pilgrims this year. It was more or less dry. I didn't see any Chital either. Langur and Chital alarm calls from Ramtalaiyya were probably for Vijaya and her cubs.
Posted by Bandhavgarh at 4:43 PM