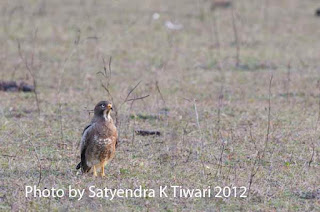 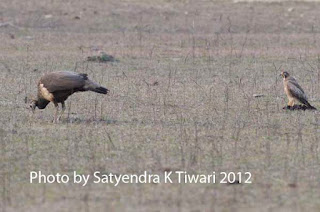 Sun was almost about to set and so the tourists for their journey back home. A lone White Eyed Buzzard was still sitting in Gohani meadow in hope to grab some meal before roosting for the night. Majority of small birds knew his presence so they left the area but few Peafowl were still hunting on small insects in the meadow. One of the Peafowl did look at him thinking Can he be a threat to me?? And probably answer came as NO in his mind. She moved forward towards him to grab an insect. He watched her grabbing her meal. I saw him watching this Peafowl for a second or so and then he must have decided that it could be a dangerous game.
Long time back I watched 4-5 Peafowl attacking a Changeable Hawk eagle at Gopalpur. It was a very successful attack. Poor chap lost few wing feathers before flying away.
It could have been the same story here again but this time they both had a respect for each other.
Posted by Bandhavgarh at 4:44 PM