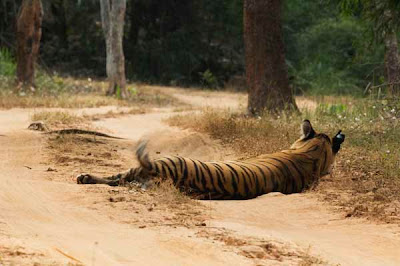 Last month I saw a foreigner women crying at the gate because she saw injured B2. This thing made so much fuss that forest department has to put all the elephants of Hardia to track him. We saw him and minutely scrutinised those photographs for his wound and our view was that wounds are not so serious.
Once we were talking to a very experienced vet from Britain who works mainly with cats, all big and small, and after seeing our cats her comment was that until a cat is eating no need to worry about their wound. This works with all cats.
B2s wounds were dry and healing. None of his wounds were weeping and none had any maggots but even than poor fellow got tranquilised and later given an antibiotic. Now Mahavat says he runs for miles after seeing an elephant. Good old B2.
I am so thankfull to all those women who saw Vijaya or Kankati and did not see her wound otherwise they would have cried more than for their h....... death.
Her injuries were far more serious than B2. Now they are almost healed and even she is pushing the Laxmi ,Limpy Lady.
Cats have amazing power to recover. Most important thing for them is constant supply of food. An old and injured Tiger dies only when he is unable to find the food for himself. Charger survived on scraps in his last lag of wild life. If he was not found that day by villagers he would have died of starvation and dehydration.
So Vijaya or Kankati is doing well in Chakradhara. In search of food she has to make rounds and rounds of her teritory around Chakradhara. She did made few attempts to come on main road but failed to grab any substantial food.
She has pushed Laxmi in such a small area of Judwani Jamunia that next few months will be very important for both of them to retain their teritory.
Posted by Bandhavgarh at 11:59 AM