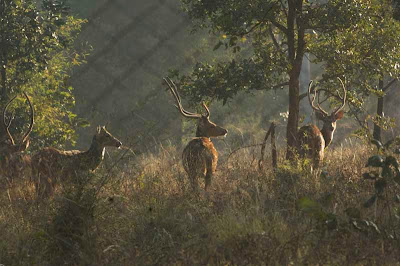 All of a sudden all the supporters of chainlink fencing has gone quite. Till few months back there were so many supporters of this chainlink fencing.
Anyway all these chainlink supporters did not do any good to the Wildlife, neither to prey and not to predator.
I was looking for this picture and this morning I got it.
A big herd of Spotted Deer grazing outside of the park. Certainly these deers were left outside at the time of fence erection. Tigers do go out but not for deer. Their favorite meal outside is cattle.
This morning I was told by a deputy Ranger that B2 and Mirchhani female and cubs were on cattle kill. They killed a buffalo and a bullock. It will be interesting to know the number of cattle kills per month done by these tigers.
Do you know that Leopard population in Tala zone is as good as Tigers and they survive 100% on wildlife. Think about the day, like Tigers, they start coming outside in search of prey ???
Enjoy seeing these Spotted Deers outside of Tala Zone.
Posted by Bandhavgarh at 1:02 PM

Thanks for the wonderful photos and information.
I would be BandhavGarh 29-31Dec, in case you are there with my 3yr old kid, I hope its ok.