Durga and her cubs. 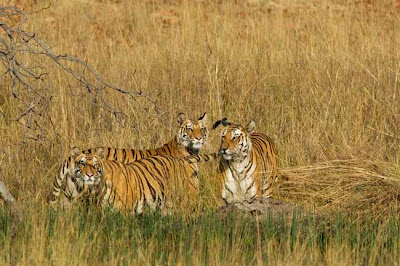 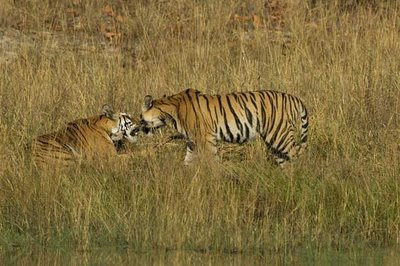 There are very few sightings of the Tiger that I remember for long time. Sometimes they becomes the best sighting of the season like Lakshmi's cubs swimming in Judwani pool, same cubs playing at Siddhbaba, Babu on Susiyari Road (with Ken), B2 swimming or carrying Chital and other day carrying Sambhar. Durga was our target since last five days. we saw few tigers by jeep but we were not happy with the situation. Other day we saw Mirchhani cubs near road but the dust cloud was so thick that after taking one or two deletable photos I suggested Kim to move. Bcause of her permission we are allowed to enter the park few minutes before so we reached Rajbehra via Badhaini. here we heard a faint alarm call of Spotted Deer. We came to pool to check the call and there she was munching a male chital. The shy female cub left the spot but one cub stayed with mother. Later on other cub joined them so photographing three Tigers moving togther was fun.
They left the pool at 0805 to climb Devkanni hill.
We book an elephant for the afternoon thinking we will found them somewhere sleeping near water. To our surprise surprise they climb the hill and came down only after we left the area.
This is Tiger Photography.
Posted by Bandhavgarh at 6:31 PM

Beautiful photo of Durga and cubs.